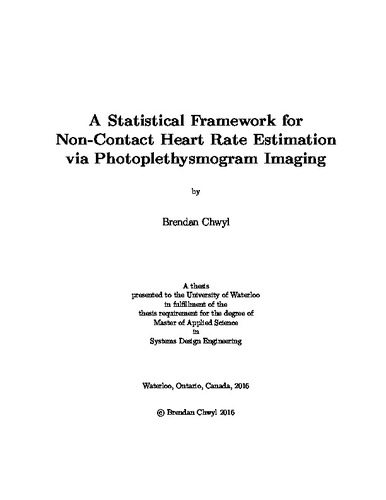 Although medical progress and increased health awareness over the last 60 years have reduced death rates from cardiovascular disease by more than 75%, cardiovascular disease remains one of the leading causes of death, hospitalization, and cause of prescription drug use. Resting heart rate can act as an independent risk factor in cardiovascular mortality, while more detailed blood volume waveforms can offer insight on blood pressure, blood oxygenation, respiration rate, and cognitive stress. Electrocardiograms (ECGs) are widely used in the clinical setting due to their accurate measurement of heart rate and detailed capture of heart muscle depolarization, making them useful in diagnosis of specific cardiovascular conditions. However, the discomfort caused by the required adhesive patches, as well as the relatively high cost of ECG machines, introduces the need for an alternative system when only the resting heart rate is required. Photoplethysmography (PPG), the optical acquisition of blood volume pulse over time, offers one such solution. The pulse oximeter, a device which clips onto a thin extremity and measures the amount of transmitted light over time, is widely used in a clinical setting for heart rate and oxygen saturation measurements in cases where ECG is unnecessary or unavailable. Recently, a technique has been demonstrated to construct a blood volume pulse signal without the need for contact, offering a more sanitary and comfortable alternative to pulse oximetry. This technique relies on camera systems and is known as PPG imaging (PPGI). However, the accuracy of PPGI methods suffers in realistic environments with error incurred by motion, illumination variation, and natural fluctuation of the heart rate. For this reason, a statistical framework which aims to offer higher accuracy in realistic scenarios is proposed. The initial step in the framework is to construct a PPG waveform, a time series correlated to hemoglobin concentration. Here, an importance-weighted Monte Carlo sampling strategy is used to construct a PPG waveform from many time series observations. Once the PPG waveform is established, a continuous wavelet transform is applied, using the so-called pulselet as the mother wavelet, to create a response map in the time-frequency domain. The average of frequencies corresponding to the maximum response over time is used as the heart rate estimation. To verify the efficacy of the proposed framework, tests were run on two data sets; the first consists of broadband red-green-blue (RGB) colour channel video data and the second contains single channel near infrared video data. In the first case, improvements over state-of-the-art methods were shown, however; in the second case, no statistically significant improvement was observed.