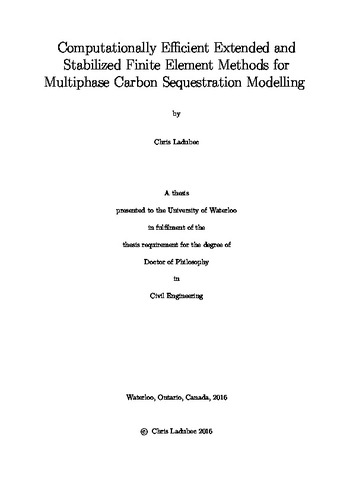 Carbon sequestration in deep saline aquifers has been proposed for long term storage of CO2 as an alternative to the release of CO2 into the atmosphere. In this thesis a computationally efficient numerical model that describes the physics of CO2 injection into deep saline aquifers is presented. The model is based on the multiphase flow and vertically averaged mass balance equations, requiring the solution of two coupled, non-linear partial differential equations - a pressure equation and a saturation equation. The numerical formulation is based on sequentially coupled Finite Element Methods (FEMs). The Finite Difference Method (FDM) is used to discretize in time. The saturation equation is a non-linear advective equation for which the application of Galerkin Finite Element Method (FEM) can lead to non-physical oscillations in the solution. Several stabilized methods are considered to control the oscillations that occur as a by-product of the approximation of the saturation equation. The methods developed are based on the the Streamline Upwind (SU) method, the Streamline Upwind Petrov Galerkin (SUPG) method, the Galerkin Least Squares (GLS) method, the Subgrid Scales (SGS) method, and the Least Squares Finite Element Method (LSFEM). Two sequential solution schemes are applied: a single step (SS) and a predictor-corrector (PC). The range of Courant numbers yielding smooth and oscillation-free solutions is investigated for each method. The useful range of Courant numbers depends upon both the sequential scheme (SS vs PC) and also the time integration method used (Forward Euler, Backward Euler, or Crank-Nicolson). For complex problems such as when two plumes meet, only the SU stabilization with an amplified stabilization parameter (SU-8τ) gives satisfactory results when large timesteps are used. The use of linear elements results in the omission of the second order term in the SUPG and LSFEM residuals. In addition, part of the perturbation operator for LSFEM also disappears. This loss of information may affect the stabilization properties of the SUPG and LSFEM methods. When linear elements are used, SUPG, GLS and SGS all result in the same formulation. Quadratic elements allow for GLS and SGS stabilizations, and permit more complete forms of SUPG and LSFEM stabilizations. The results show that SGS, GLS and SU-8τ (SU with an amplified value of the stabilization parameter) are the most robust stabilization methods considered. SGS and GLS are the preferred choice at small timesteps, and SU-8τ is the most suitable for relatively large timesteps. Quadratic elements are shown to better handle the case of merging CO2 plumes compared with linear elements, but quadratic elements experience greater oscillations when encountering a Dirichlet boundary. The proposed formulation is compared against an existing benchmark study where eleven different simulators were used to determine the arrival time of the CO2 at a leaky well. Four examples consider non-uniform permeability, multiple injection wells, an upsloping aquifer, and a dome shaped aquifer. A new adaptive timestep strategy is implemented which allows stable solutions with increasing timesteps as time progresses. The adaptive timesteps reduce the computational cost by 75-82 % compared to constant timesteps in the four examples shown. The eXtended Finite Element Method (XFEM) is introduced to accurately approximate near-injection well pressure behaviour with elements significantly larger than the injection well diameter. A vertically averaged multiphase flow model is presented that combines XFEM to approximate the pressure field, with a Streamline Upwind/Finite Element/FDM (SU-FEM-FDM) to approximate the distribution of CO2 in the aquifer. Near-well enrichment functions are presented along with the solution procedure for the coupled problem. Two examples are presented; in the first, CO2 injection into a perfectly horizontal aquifer is modelled with both XFEM and FEM-based methods. The results suggest that XFEM is able to provide low relative errors in the pressure near the well at a reduced computational cost compared to FEM. The impact and selection of the stabilization coefficient of the SU-FEM-FDM is also discussed. In the second example, the XFEM and SU-FEM-FDM models are applied to a more realistic problem of an inclined aquifer to demonstrate the ability of the model to capture the buoyancy driven migration of CO2 in a deep saline aquifer.