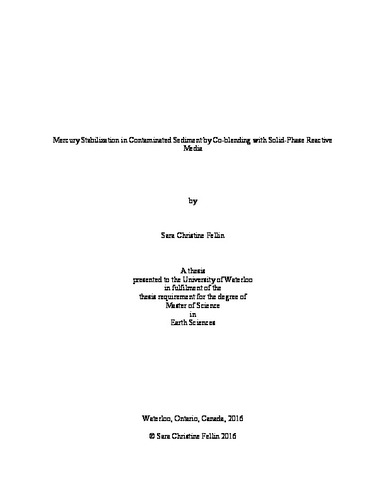 Mercury (Hg) is a toxic heavy metal and environmental contaminant that can accumulate in both terrestrial and aquatic environments. Pollutant Hg is derived primarily from anthropogenic sources such as mining, coal burning and other high-temperature incineration processes. Mercury tends to bioaccumulate in organisms via exposure to the highly neurotoxic organomercury compound methylmercury (MeHg). Remediation of Hg contamination in river systems is a complex process due to the persistence of Hg in the environment and the nature of Hg methylation, sorption to solids, transport and deposition. Elevated concentrations of Hg and MeHg are present throughout portions of the South River watershed in Virginia. Mercury was released to the river from 1929-1950 as a result of industrial processes and remains bound to riverbank sediments and floodplain soils. Erosion of riverbanks and floodplain runoff are now secondary sources of Hg to the South River, decades after the initial contamination. Saturated column experiments were conducted to evaluate the effect of several inorganic soil amendments on Hg mobilization and transport. Contaminated sediment from the South River was blended with a 2 % amendment (dry weight) of limestone, attapulgite clay or sulfidized attapulgite clay and flushed with low-Hg water from the South River for 36 - 47 weeks representing 150 PV of flow. No appreciable stabilization or mobilization of Hg was observed in the sediment blended with limestone; Hg concentrations in the column effluent were similar in magnitude to the sediment control. Extensive Hg mobilization occurred in the sediment amended with attapulgite clay, with an increase in cumulative effluent 0.45 µm-filtered Hg of more than 200%. This result indicates that there is potential for both destabilization of Hg previously bound to the sediment and colloid-facilitated transport of Hg in the presence of a clay amendment. Imparting S functional groups onto the surface of attapulgite clay greatly reduced Hg transport relative to both the unmodified clay and the sediment control. The cumulative release of Hg in the column effluent for the 0.45 µm-filtered fraction in the sediment amended with sulfidized clay was 24 % of the sediment control and 7.5 % of the unmodified clay. The strong interactions between Hg and S may have promoted binding of Hg to the surface of the modified clay and subsequent agglomeration and deposition of Hg-bearing clay particles. Elevated concentrations of MeHg were observed only in the sediment amended with unmodified clay, likely as a result of an increase in bioavailable Hg. The use of biochar as an amendment to sequester Hg in contaminated sediment was evaluated in five saturated column experiments, including a sediment control, a 2 % (dry weight) amendment of unmodified biochar, a 2 % amendment of HNO3-modified biochar, a 2 % amendment of sulfidized biochar and a 5 % amendment of sulfidized biochar. No suppression of Hg transport was observed in the sediment blended with unmodified biochar and HNO3-modified biochar, while increased binding of Hg was observed in both the 2 % and 5 % amendments of sulfidized biochar. The cumulative release of 0.45 µm-filtered Hg in the effluent of the sediment blended with a 2 % amendment of sulfidized biochar was 29 % of that observed in the control, while the cumulative release for the 5% amendment of sulfidized biochar was 17 % of the control. In both columns, Hg was likely bound to the surface of the modified biochar through the formation of Hg-S complexes, rendering it less mobile. In all sediment amendment columns, effluent chemistry and net MeHg production were not appreciably impacted by the addition of biochar. The results of this study suggest that amendment of the Hg-bearing sediment with sulfidized biochar in saturated, dynamic conditions may lead to decreased Hg transport.