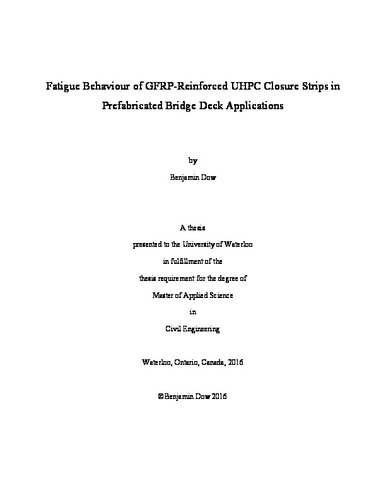 Accelerated bridge construction techniques allow for bridges to be constructed or replaced more quickly in order to save commuter time and money. One of these techniques involved the use of prefabricated bridge deck panels, which are connected to each other by high strength closure strips. This thesis report investigates the performance of a closure strip filled with ultra-high performance concrete under fatigue loads at service levels as well as at failure loads. Four nearly full-scale (150 mm deep) bridge deck specimens were constructed, each consisting of two panels connected by a UHPC filled closure strip. Two of the specimens were reinforced with ribbed glass fibre reinforced polymer (GFRP) reinforcing bars and the remaining two were reinforced with sand-coated GFRP bars. One specimen fabricated with each bar type was loaded under fatigue (cyclic) loading equivalent to the maximum wheel load specified in the Canadian Highway Bridge Design Code for 2,000,000 cycles at three locations: the centre of a precast concrete panel, the centre of the closure strip, and adjacent to the closure strip. The remaining specimen of each bar type was only fatigue tested adjacent to the closure strip at the same load level for 2,000,000 cycles. The slabs were then loaded monotonically to failure. It was found that the specimens generally exhibited noticeably increased deflections during initial fatigue loading followed by a more gradual deflection increase for the remainder of the fatigue loading. The slabs reinforced with the ribbed GFRP bars were found to exhibit significantly larger deflections than the sand-coated bars. The slab with ribbed bars, which was intended to undergo fatigue loading at three locations, experienced failure of the bottom bars during testing at the second fatigue location. Similarly, the specimen with ribbed bars only loaded adjacent to the closure strip also did not complete the planned 2,000,000 cycles due to premature failure of the bottom transverse reinforcement. When loaded to failure adjacent to the closure strip, both of the specimens reinforced with the sand-coated GFRP bars experienced a punching shear failure. The punching shear failure surface typically has a cone or pyramidal shape. However, the punching cone for both specimens was truncated by the UHPC closure strip, resulting in a three sided failure cone, with slip occurring along the interface between the precast concrete and the UHPC. The specimens reinforced with ribbed bars were also loaded to failure. However, these specimens failed due to the top fibre of the concrete crushing along the length of the slab due to the lack of bottom reinforcement continuity resulting from the rebar failures during fatigue loading. Finite element models were generated in ABAQUS to provide an understanding of the general stress patterns experienced throughout the slab. The initial load comparison (model vs. measured) yielded similar results, with the model showing slightly more initial stiffness, but cracking at approximately the same load. In addition, the failure loads were compared to two building and bridge code specifications: CSA S6 and CSA A23.3, and it was found that the punching shear failure for the two sand-coated GFRP reinforced specimens was less than the specified values for each of these design codes due to the punching failure occurring on only three sides of the load instead of the four sides assumed by the codes. In conclusion, the specimens with sand-coated reinforcement maintained stiffness throughout fatigue loading and failed in a three-plane punching shear mode, and the specimens with ribbed reinforcement failed during fatigue loading when the bottom transverse reinforcement broke, resulting in significant deflections and pre-empting failure by punching shear.