Fostering the Feral in Civilization: Reading Animal Characterization in Ken Kesey's "One Flew Over the Cuckoo's Nest" 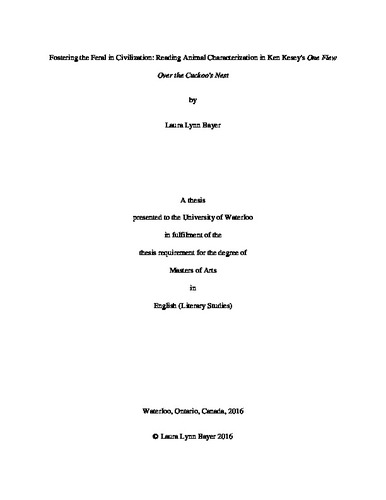 Representations of the animal, although prominent in literature, are often overlooked as sources for rigorous analysis. When acknowledged, their interpretation is restricted to the realm of archetypal significance and rarely explored beyond the moment of their mention. By examining the role of the animal (more specifically canine characterization) as it appears in Ken Kesey's 1962 novel, "One Flew Over the Cuckoo's Nest," this thesis demonstrates ways that the biological and behavioural elements of the animal used to characterize humans is critical to exposing any given text's underlying sociopolitical commentary - in this instance, the parallels that exist between human civilization and the domestication of the animal. With that in mind, this project combines biological and behavioural research of the animal with anarcho-primitive theory and psychology in order to question and reorient the perceived boundaries between humans and animals, as well as between civilization and wildness. Reading animal characterization from such a perspective is an important way for literary critics to take part in and revise some of the emerging conversations in the broader field of Animal Studies.