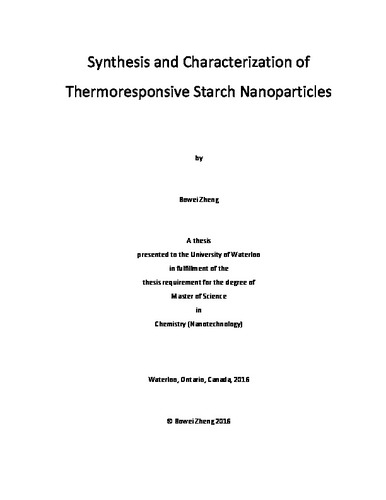 Thermoresponsive polymers (TRPs) are polymers that exhibit an abrupt change in their physical properties, such as solubility, with a change in temperature. The vast majority of TRPs produced to date are synthetic and petroleum-based polymers. Commercial applications of these TRPs have been limited to only a few low-volume applications. The main reasons for this are the high costs of production, and environmental and health concerns, such as biodegradability and toxicity. TRPs based on benign natural polymers such as cellulose and starch have garnered some attention recently due to their biodegradability, biocompatibility, low toxicity and potentially low production cost. The modification of starch nanoparticles (SNPs) with 1,2-butene oxide (BO) was studied. This yielded hydroxybutyl SNPs (HBSNPs) that exhibit thermoresponsive behavior. Turbidity measurements showed that an increase in the molar substitution (MS) resulted in a decrease in the cloud point temperature (Tc), and an increase in the concentration of the aqueous HBSNP dispersions also decreased the Tc. The Tc of the HBSNPs were tuned in a range from 33 to 52oC by adjusting the MS. For HBSNPs to exhibit thermoresponsivity, the MS of the HB groups had to be greater than 1. Dynamic light scattering studies showed that there was a substantial increase in the particle size of HBSNPs when the temperature reached the Tc. Studies of the effect of salts on Tc revealed that as the concentration of the salts increased, kosmotropic salts decreased the Tc, while chaotropic salts increased the Tc. Phenyl hydroxyethyl SNPs (PHESNPs) were prepared by modifying SNPs with styrene oxide (SO). PHESNPs had relatively poor dispersability in water due to the high hydrophobicity of the substituting phenyl hydroxyl groups, and they do not exhibit thermoresponsive behavior.