Responding to Ethical Dilemmas in the Anthropocene: Sven Böttcher’s Prophezeiung 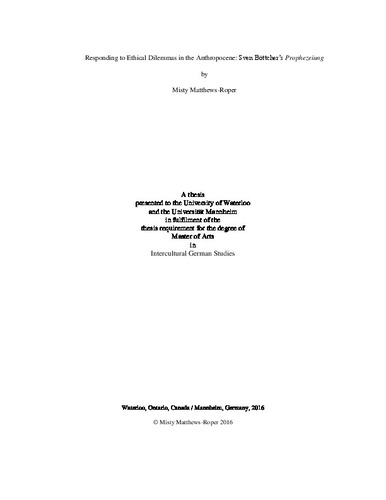 This thesis examines Sven Böttcher’s novel, Prophezeiung (2011), a climate change thriller. Prophezeiung does not call into question the reality of climate change or global warming; rather it seeks to come to terms with these issues. The novel explores a number of ethical dilemmas that arise due to a computer-predicted climate catastrophe. This thesis establishes a theory of ethics and then investigates key scenes from the plot as well as the actions of the characters to determine their ethical merit. Prophezeiung is a mixture of three different genres: science fiction, thriller, and docufiction. The impending climate catastrophe in the novel constrains and changes some of the genre-specified roles of the characters. Analysing some of these changes reveals that the characters are used mainly to depict different outcomes of popular responses to climate problems in the Anthropocene. Böttcher appends to the novel a recommended reading list to provide some context to the positions held by the main characters. After establishing who the heroes of the novel are, this thesis explores that reading list to understand some of the novel’s many references to the real world. Finally, the novel is analysed using one such reading: Albert Camus’s The Myth of Sisyphus. More specifically, Prophezeiung’s ambiguous conclusion is examined using Camus’s philosophy of the absurd as outlined in this work. Prophezeiung concludes when the catastrophe is revealed as an elaborate hoax, leaving unresolved the real issues of climate change and global warming. Instead of allowing the reader to feel overwhelmed or despair that humanity is ultimately doomed to failure, Prophezeiung suggests facing these climate problems by relying on Camus’s categories of revolt, freedom, and passion.