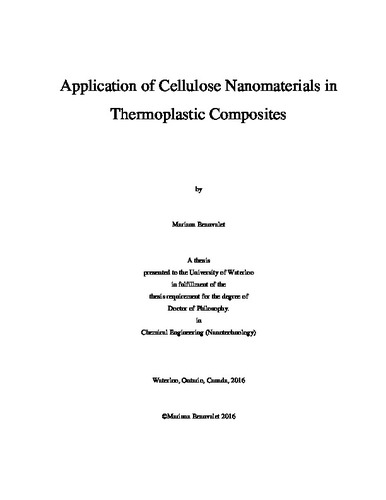 Nanocrystalline cellulose (CNC) is a renewable and biodegradable nanomaterial obtained by acid hydrolysis of cellulose. It exhibits notable mechanical properties: a high aspect ratio and a high surface area. These properties make CNC a promising nanofiller for applications in polymer nanocomposites. But because of its surface characteristics, CNC is not compatible with hydrophobic polymers like polyethylene or polypropylene. This work focuses on the surface modification and incorporation of CNC into polyolefins (polyethylene and polypropylene). Surface modifications with organo-silanes were used to compatibilize the CNC with the polymers. The modifications increased the thermal stability of the CNC by approximately 50°C. Polyethylene nanocomposites were prepared with unmodified and modified CNCs by in situ polymerization of ethylene. The improvement in thermal stability promoted by the modification avoided the degradation of the modified CNCs during the polymer processing by extrusion and injection molding. The incorporation of the CNC into the polyethylene matrix did not have a significant influence on the mechanical properties of the polymer, with the exception being the impact strength of one of the nanocomposites that was 94% higher than the pure polyethylene. The incorporation of the modified CNC into polypropylene was done by two different methods: in situ polymerization and melt compounding. The CNC incorporation had a positive effect on some mechanical properties polypropylene, particularly the impact strength that improved by over 99%. In this work, CNC was also modified by adsorption of surfactants. Several surfactants were evaluated to change the surface characteristics of CNC from hydrophilic to hydrophobic. The hydrophobization of the CNC promoted by the modification allowed its dispersion in organic solvents. More specifically, CNC modified with a combination of two surfactants formed a clear, homogeneous and stable dispersion in toluene. At higher concentrations (7.5% in toluene), the gelation of the modified CNC was observed and a clear and homogeneous gel was formed. The ability of a CNC modified with surfactant to increase the viscosity of toluene at low concentrations was also observed.