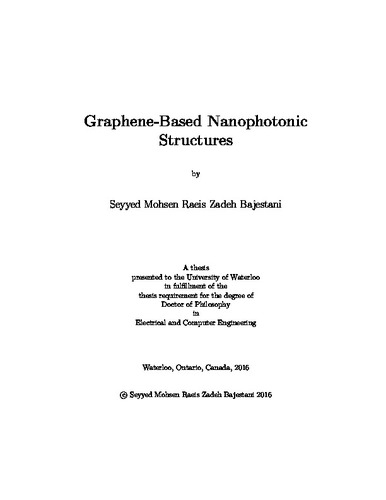 Terahertz (THz) technology offers a rich playground for a vast number of research topics and applications. High resolution imaging for biomedical applications, long-wavelength spectroscopy for interstellar applications, security monitoring, communication, quality control, and process monitoring are just among a few possible applications of the THz technology. While the lack of an efficient source is a huge obstacle in flourishing of THz technology, the potentially huge impact of THz technology in many areas of every day human life has motivated extensive world-wide research efforts in this area. In response to the widespread need for the cost-effective miniaturized THz active devices, this thesis describes theoretical and practical methods developed for the analysis, the design optimization, and the fabrication of a graphene-based THz photomixing sources. The main contributions, from an analysis point of view, include a new computationally efficient multipole-based method with a surface boundary condition (SBC) to analyze the wave interaction with graphene and also development of a comprehensive theoretical model for modeling of the difference frequency generation (DFG) in graphene. The proposed multipole-based method is deployed to find the linear interaction of light with graphene and also to verify the volumetric model that will be used in the design optimization of the THz photomixing structure. In the nonlinear analysis, symmetry breaking and the advent of second order processes such as the DFG in graphene are discussed in detail. I, specifically, explore the role of DC biasing and the wave momentum as two mechanisms effective in symmetry breaking. As a result, nonlinear conductivity of the graphene layer is calculated for an obliquely incident wave and in the presence of a DC current using a quantum mechanical approach. From a design optimization point of view, design of a new nanoplasmonic structure for the DFG enhancement and a THz antenna for the efficient radiation of the generated THz signal are the main focuses of this work. I start by verifying the plasmon enhanced wave interaction with the graphene layer via the Raman spectroscopy. Next, I use the obtained nonlinearity in conjunction with the volumetric model to design and analyze the complex structure of photomixer in the perturbation limit. The nonlinear analysis shows the achievable THz power of 1 μW from an incident laser pulse with the fluence of 15mW/cm^2. I then investigate the effect of designed log-periodic antenna and I show how the antenna can be used to control the generated THz power. Finally, the new recipe developed for the fabrication of the graphene-based photomixer structure is presented. The developed recipe ensures a reliable and repeatable fabrication process even for large area graphene devices. In addition, a comparison between the developed recipe and those typically used in nanofabrication is depicted. This work ends by showing the measurement setups and the measurement results for the fabricated devices.