From Competition to Caregiving: Alleviating the Negative Effects of Appearance-Focused Social Comparisons 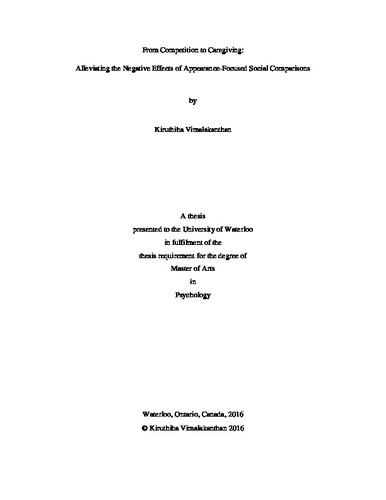 Social comparison theory (Festinger, 1954) suggests that individuals compare themselves to others in order to determine their standing in various life domains (e.g., wealth, intelligence, popularity). These social comparisons are especially common in the physical appearance domain, in which women frequently compare their appearance to that of other women, even when it becomes detrimental to their body image (Strahan et al., 2006). Applying Gilbert’s (2000) social mentalities theory, which posits that individuals can adopt various mindsets in their interactions with others, this study used a novel intervention to investigate whether cultivating a caregiving mentality would alleviate the negative consequences of appearance-focused social comparisons. For 48 hours, 57 female undergraduates practiced one of three strategies when they made unfavourable appearance comparisons: cultivating feelings of compassion and loving-kindness toward the comparison target (Caregiving); comparing themselves favourably to the target in other domains (Competition); or distracting themselves (Control). The Caregiving condition tended to increase feelings of social safeness more than the other conditions. Furthermore, among women with higher baseline eating pathology, the Caregiving condition was more effective than the Competition condition at reducing body dissatisfaction and eating-disorder related comparison orientation. Similarly, among women with lower trait compassion, the Caregiving condition was more effective than the Competition condition at increasing feelings of social safeness and reducing eating disorder-related comparison orientation. Findings suggest that cultivating a compassion-oriented, caregiving mentality when threatened by appearance-focused social comparisons could help young women, especially those most vulnerable, to reduce the negative consequences tied to these comparisons and to improve feelings of social connectedness.