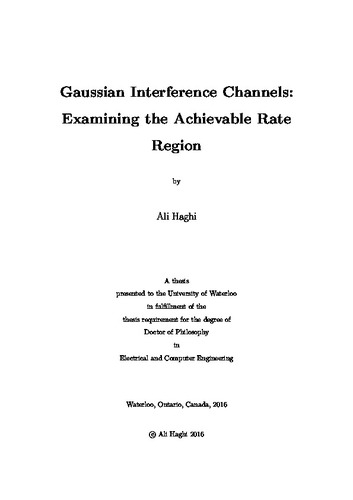 Interference is assumed to be one of the main barriers to improving the throughput of communication systems. Consequently, interference management plays an integral role in wireless communications. Although the importance of interference has promoted numerous studies on the interference channel, the capacity region of this channel is still unknown. The focus of this thesis is on Gaussian interference channels. The two-user Gaussian Interference Channel (GIC) represents the standard model of a wireless system in which two independent transmitter-receiver pairs share the bandwidth. Three important problems are investigated: the boundary of the best-known achievable rate region, the complexity of sum-rate optimal codes, and the role of causal cooperation in enlarging the achievable rate region. The best-known achievable rate region for the two-user GIC is due to the Han-Kobayashi (HK) scheme. The HK achievable rate region includes the rate regions achieved by all other known schemes. However, mathematical expressions that characterize the HK rate region are complicated and involve a time sharing variable and two arbitrary power splitting variables. Accordingly, the boundary points of the HK rate region, and in particular the maximum HK sum-rate, are not known in general. The second chapter of this thesis studies the sum-rate of the HK scheme with Gaussian inputs, when time sharing is not used. Note that the optimal input distribution is unknown. However, for all cases where the sum-capacity is known, it is achieved by Gaussian inputs. In this thesis, we examine the HK scheme with Gaussian inputs. For the weak interference class, this study fully characterizes the maximum achievable sum-rate and shows that the weak interference class is partitioned into five parts. For each part, the optimal power splitting and the corresponding maximum achievable sum-rate are expressed in closed forms. In the third chapter, we show that the same approach can be adopted to characterize an arbitrary weighted sum-rate. Moreover, when time sharing is used, we expressed the entire boundary in terms of the upper concave envelope of a function. Consequently, the entire boundary of the HK rate region with Gaussian inputs is fully characterized. The decoding complexity of a given coding scheme is of paramount importance in wireless communications. Most coding schemes proposed for the interference channel take advantage of joint decoding to achieve a larger rate region. However, decoding complexity escalates considerably when joint decoding is used. The fourth chapter studies the achievable sum-rate of the two-user GIC when joint decoding is replaced by successive decoding. This achievable sum-rate is known when interference is mixed. However, when interference is strong or weak, it is not well understood. First, this study proves that when interference is strong and transmitters' powers satisfy certain conditions, the sum-capacity can be achieved by successive decoding. Second, when interference is weak, a novel rate-splitting scheme is proposed that does not use joint decoding. It is proved that the difference between the sum-rate of this scheme and that of the HK scheme is bounded. This study sheds light on the structure of sum-rate optimal codes. Causal cooperation among nodes in a communication system is a promising approach to increasing overall system performance. To guarantee causality, delay is inevitable in cooperative communication systems. Traditionally, delay granularity has been limited to one symbol; however, channel delay is in fact governed by channel memory and can be shorter. For example, the delay requirement in Orthogonal Frequency-Division Multiplexing (OFDM), captured in the cyclic prefix, is typically much shorter than the OFDM symbol itself. This perspective is used in the fifth chapter to study the two-user GIC with full-duplex transmitters. Among other results, it is shown that under a mild condition, the maximum multiplexing gain of this channel is in fact two.