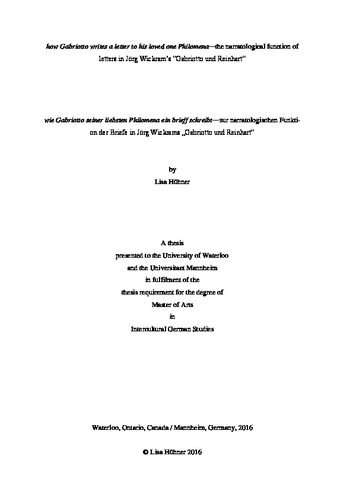 The following thesis deals with the twelve letters, more explicitly, love letters in Wickram’s “Gabriotto und Reinhart” and their narratological function for the story, plot and narration itself. At first I will talk about letters in general and view letters as a specific type of text. Then I will discuss the communicative situation in letters and talk about the narratological integration of letters in fictional literature. This integration of letters in the narration and story is shown by letters in Wickram’s text. This is followed by an analysis of the specific narratological functions of the letters for the storyworld. Main focus in this section is on the possibilities and functions of letters for the narration. Thereby I will differentiate between directly and indirectly narrated letters. Another main part of this paper is a detailed analysis of the different types of letters in the novel. Namely love letters, farewell letters and letters, which push the plot forward. Furthermore I will investigate another function of letters, namely the communicative boundary crossing. Letters are the medium which allows the protagonists to communicate across social boundaries. Letters cross borders and boundaries and push past them. They cross social as well as spatial boundaries and ultimately even the border between life and death. This highlights not only the function of border crossing, but also makes the insupe-rability of those boundaries and the huge risk of the communication and the relationship itself obvious. The secret relationship of the protagonists and the secret and thus forbidden communication via letters is the very reason for this pushing past social boundaries. Closely connected to that is the transit of the letters, which must also be in secret and which takes up a huge part of the story and narration. Also connected to that is the vulnerability of the communication and the possibility of failure. I will also discuss the letter as body and embodiment of the sender. One of the main func-tions of the letters in the story is the substitution for verbal and direct communication as this is not possible, so they bring about the relationship and keep it going. The protagonists cannot be physically together or share physical intimacy, the letter functions as a kind of substitute for that and is thus eroticized. Letters also trigger emotions and feelings and are used to depict them. Letters also offer the reader insight into the thoughts of the characters and by doing so convey more authenticity than if they were narrated by the narrator. Furthermore letters advance the complexity of the communication and connect the epi-sodes with each other. They connect places, time and characters.