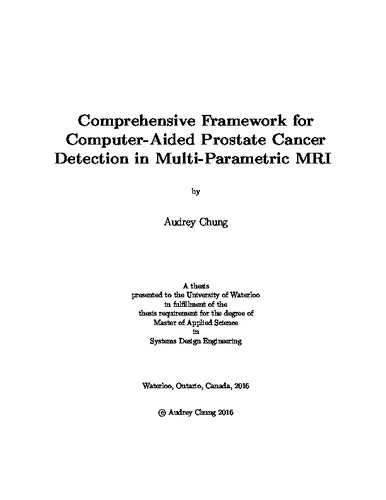 Prostate cancer is the most diagnosed form of cancer and one of the leading causes of cancer death in men, but survival rates are relatively high with sufficiently early diagnosis. The current clinical model for initial prostate cancer screening is invasive and subject to overdiagnosis. As such, the use of magnetic resonance imaging (MRI) has recently grown in popularity as a non-invasive imaging-based prostate cancer screening method. In particular, the use of high volume quantitative radiomic features extracted from multi-parametric MRI is gaining attraction for the auto-detection of prostate tumours since it provides a plethora of mineable data which can be used for both detection and prognosis of prostate cancer. Current image-based cancer detection methods, however, face notable challenges that include noise in MR images, variability between different MRI modalities, weak contrast, and non-homogeneous texture patterns, making it difficult for diagnosticians to identify tumour candidates. In this thesis, a comprehensive framework for computer-aided prostate cancer detection using multi-parametric MRI was introduced. The framework consists of two parts: i) a saliency-based method for identifying suspicious regions in multi-parametric MR prostate images based on statistical texture distinctiveness, and ii) automatic prostate tumour candidate detection using a radiomics-driven conditional random field (RD-CRF). The framework was evaluated using real clinical prostate multi-parametric MRI data from 20 patients, and both parts were compared against state-of-the-art approaches. The suspicious region detection method achieved a 1.5% increase in sensitivity, and a 10% increase in specificity and accuracy over the state-of-the-art method, indicating its potential for more visually meaningful identification of suspicious tumour regions. The RD-CRF method was shown to improve the detection of tumour candidates by mitigating sparsely distributed tumour candidates and improving the detected tumour candidates via spatial consistency and radiomic feature relationships. Thus, the developed framework shows potential for aiding medical professionals with performing more efficient and accurate computer-aided prostate cancer detection.