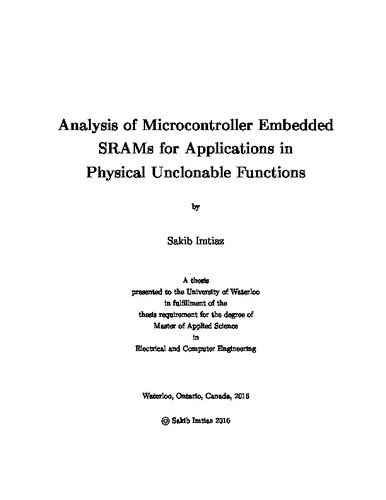 The growth of the Internet of Things (IoT) market has motivated widespread proliferation of microcontroller- (MCU) based embedded systems. Suitable due to their abundance, low cost, low power consumption and small footprint. The memory architecture typically consists of volatile memory such as block(s) of SRAM, and non-volatile memory (NVM) for code storage. Authentication and encryption safeguard these endpoints within an IoT framework, which requires storage of a secure key. Keys stored within integrated circuits (ICs) are susceptible to attack via reverse engineering of the NVM. Newer approaches use Physical Unclonable Functions (PUFs), which produce unique identi ers that takes advantage of device-level randomness induced by manufacturing process variation in silicon. The unclonable property of PUFs is demonstrated with an analytical model. The unpredictable yet repeatable start-up values (SUVs) of SRAM bit-cells form the basis of an SRAM PUF. Performance measures, such as reliability, randomness, symmetry, and stability, dictate the quality of a PUF. Two commercial o -the-shelf (COTS) ARM-Cortex based MCU products, the STM32F429ZIT6U and ATSAMR21G18A, underwent automated and manual power cycling experiments that examined their embedded SRAM SUVs. The characterization framework provided acquires data via debug software and a developed C program, power cycling using a USB controlled relay and post-processing using Python. Applications of PUFs include cryptographic key generation, device identi cation and true random number hardware generation. Statistical results and a comparative analysis are presented. Amongst the total bitcell count of the embedded SRAM in STM and ATSAM MCUs, 36:86% and 28:86% are classi ed as non- or partially-skewed, respectively across N = 10; 000 samples. The Atmel MCU outperforms the STM MCU in reliability by 1.42 %, randomness by 0.65 % and stability by 8.00 %, with a 4.74 % SUV bias towards a logic '1'. Max errors per 128-bit data item is 22 and 38 bits for MCU #1 and MCU #2, respectively. The STM MCU exhibits column-wise correlation illustrated in a heatmap, where the Atmel MCU shows a random signature. The embedded SRAM in the Atmel MCU outperforms the STM MCU's and is thereby considered the more suitable PUF.