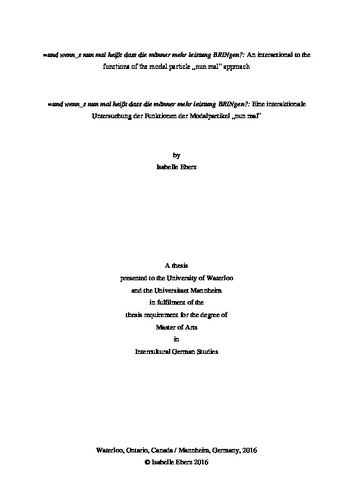 Human interaction is mainly based on conversation. Without conversations, we would not be able to communicate with each other. To communicate, we use words and each word has different and specific meaning. In the German language, there is a rich variety of (modal) particles; that are usually small and short words, which are often and easily overlooked as they are mainly seen as an element of the spoken language. Especially for language learners, modal particles are difficult to learn and understand because their meaning is highly pragmatic. This thesis deals with the actual disposition and function of the modal particle nun mal in real conversation. Until now, there are almost no studies which worked according to conversational analysis and used an interactional approach, but concentrated on invented examples to define the function of modal particles in general. The thesis is based on 76 data examples, which include different varieties of nun mal (56x), such as nu mal (8x), nu ma (5x), nun einmal (5x), nu einmal (1x), and nun ma (1x). The analysis will show that nun mal marks some type of evidence of a constructed reality, which seems to be unchangeable. The grounding of these constructed realities are based on different levels of epistemic domains, which refer back Allgemeinwissen, common sense, personal common ground, communal common ground, and/or the pre-interaction or the personal epistemic domain of the speaker. The grounding can refer back to more than one of these domains and can be supported by additional linguistic tools. Furthermore, it will be shown that by using nun mal, speakers mark the information as given and explicitly not new to the recipient. Nun mal is used in environments, in which speakers are misaligned, which are problematic or in which it is likely that someone objects to the current talk. Based on the constructed reality, speakers use nun mal to achieve different goals, e.g. to constitute a consensus, to end a discussion or topic, to introduce a logical result and outcome, or to work as an objection. Additionally, this thesis will analyze different examples at syntactic boundaries, which are not congruent with the current research of modal particles as they are traditionally seen as limited to the syntactic inner field. This could open new possibilities for future research in this field.