The Role of Executive Functions in Children’s Communication Repair 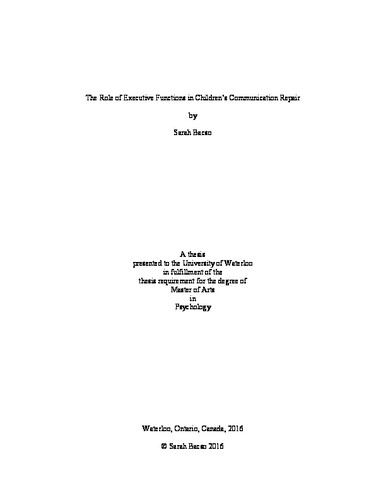 Young children often provide ambiguous referential statements for their listeners. Thus, the ability to identify when miscommunication has occurred and subsequently repair messages is an essential component of communicative development. The present study examined the impact of listener feedback and children’s executive functioning in influencing children’s ability to repair their messages. Further, this work explored whether the cognitive demands of repair differed depending on the type of feedback provided by the listener. Children (ages 4 to 6) completed a referential communication task, in which they described target pictures amongst an array of similar distractors for a confederate. Stimuli were designed such that children would often provide initially ambiguous referential statements. Subsequently they were provided with feedback from the confederate indicating they had been misunderstood. Feedback was either detailed and specified the nature of the miscommunication, or was vague and did not. Children also completed executive functioning tasks assessing their working memory, inhibitory control, and cognitive flexibility. Children with larger working memory capacities and better cognitive flexibility were found to provide more effective initial descriptions of the target pictures. Children with better cognitive flexibility were also more effective at repairing their statements in response to feedback indicating they had been misunderstood. While children provided more effective repairs following detailed feedback than vague feedback, this effect did not interact with the cognitive skills of the children. The practical implications of the results are discussed.