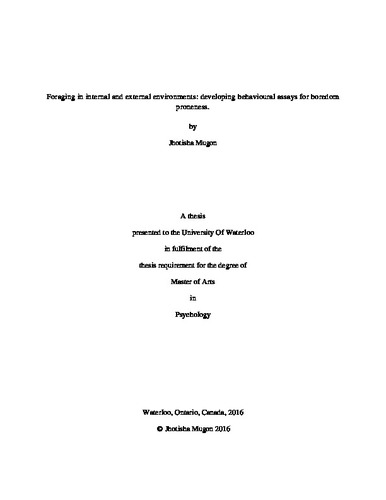 Previous research has shown that boredom proneness is associated with failures of self-regulation. As yet few studies have directly explored the behavioural consequences of this relationship. The goal of this study was to examine the behavioural constituents of boredom proneness and various self-regulatory traits. Foraging represents a common goal directed behaviour that emphasises exploration and attainment of valued outcomes. As such, foraging tasks were used as behavioural assays of self-regulatory behaviour. Foraging can be thought of as either internal or external: an internal forging task, emphasizes exploration of problem spaces with a goal of determining as many solutions as possible. The Boggle game, in which participants made as many words as possible from a grid of 9 letters, was used as an internal foraging task. An external foraging task, on the other hand, emphasizes exploration of physical or virtual environments, with a goal of maximizing provisions. A spatial foraging task, in which participants explored a virtual environment collecting as many red “berries” as possible, served as an external foraging task. Results suggest that although each self-regulatory trait was associated with a specific set of behaviors, self-regulatory traits seem to be better characterized as behavioral preferences. When individuals behaved contrary to what would be preferred under a given self-regulatory trait, it reflects a recurrent lack of regulatory fit. Instances of non-fit in the current study were associated with increased trait boredom proneness. These findings suggest that how goals are pursued may be an important determinant of boredom proneness.