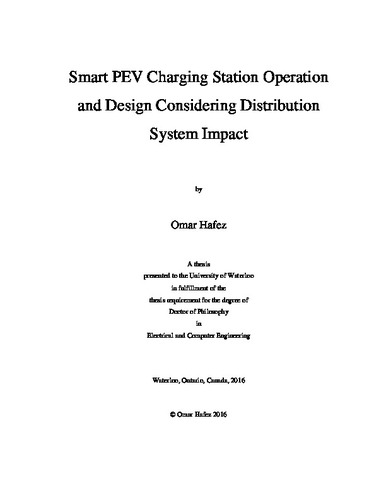 Penetration of plug-in electric vehicles (PEVs) into the market is expected to be large in the near future. Also, as stated by the Ontario Ministry of Transportation, the province is investing $20 million from Ontario's Green Investment Fund to build nearly 500 electric vehicle charging stations (EVCSs) at over 250 locations in Ontario by 2017. Therefore, estimating PEV charging demand at an EVCS with their complex charging behavior, their impact on the power grid, and the optimal design of EVCS need be investigated. This thesis first presents a queuing analysis based method for modeling the 24-hour charging load profile of EVCSs. The queuing model considers the arrival of PEVs as a non-homogeneous Poisson process with different arrival rates over the day; considering customer convenience and charging price as the factors that influence the hourly arrival rate of vehicles at the EVCS. One of the main contributions of the thesis is to model the PEV service time considering the state-of-charge of the battery and the effect of the battery charging behavior. The impact of PEV load models on distribution systems is studied for a deterministic case, and the impact of uncertainties is examined using the stochastic optimal power flow and Model Predictive Control approaches. The thesis presents a novel mathematical model for representing the total charging load at an EVCS in terms of controllable parameters; the load model developed using a queuing model followed by a neural network (NN). The queuing model constructs a data set of PEV charging parameters which are input to the NN to determine the controllable EVCS load model. The smart EVCS load is a function of the number of PEVs charging simultaneously, total charging current, arrival rate, and time; and various class of PEVs. The EVCS load is integrated within a distribution operations framework to determine the optimal operation and smart charging schedules of the EVCS. Objective functions from the perspective of the local distribution company (LDC) and EVCS owner are considered for studies. The performance of a smart EVCS vis-à-vis an uncontrolled EVCS is examined to emphasize the demand response (DR) contributions of a smart EVCS and its integration into distribution operations. Finally, the thesis presents the optimal design of an EVCS with the goal of minimizing the life-cycle cost, while taking into account environmental emissions. Different supply options such as renewable energy technology based and diesel generation, with realistic inputs on their physical, operating and economic characteristics are considered, in order to arrive at the optimal design of EVCS. The charging demand of the EVCS is estimated considering real drive data. Analysis is also carried out to compare the economics of a grid-connected EVCS with an isolated EVCS and the optimal break-even distance is determined. Also, the EVCS is assumed to be connected to the grid as a smart energy hub based on different supply options.