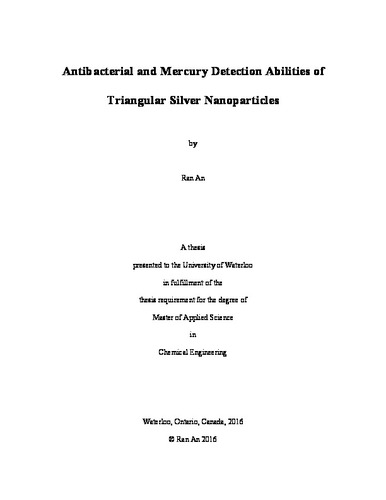 Silver nanoparticles (AgNPs) have been studied for a long time, because of their significant application in photonics, drug delivery, biological medicine, wastewater treatment, antimicrobials, catalysis and sensors. This is due to their inherent electronic, physicochemical, biological, and visual properties, which are determined by their size, shape, composition, crystallinity, and structure. This study focuses on the synthesis of triangular silver nanoparticles, and functionalization by the biopolymer Poly-L-lysine (PLL). NaBH4 reduced triangular AgNPs were successfully synthesized, and attached by Poly-L-lysine (PLL). The morphology of AgNPs and AgNP-PLL was measured by transmission electron microscopy (TEM). The results of UV/Vis-spectroscopy, zeta-potential and dynamic light scattering (DLS) indicate that the AgNP-PLL have the property of broad-spectrum activity for both Gram-negative bacteria and Gram-positive bacteria. The bacteria tests show good results, such that when AgNP-PLL was applied to the tested bacterial strains, E. coli decreased 97.27 %, P. aeroginosa decreased 99.2%, B. subtilis decreased 99.14%, and S. aureus decreased 94.6% in 4 hours. Toxic heavy metals have been considered to be one of the contaminants of concern in certain aqueous solutions. Polyvinylpyrrolidone (PVP) stabilized triangular AgNPs were developed for the detection of mercury (II) (Hg2+). AgNPs were characterized via TEM, DLS, and UV-Vis spectrophotometry, proving that the shape of the AgNPs are triangular with an intense surface plasmon resonance, and the zeta potential results indicate that the negative surface charge of the AgNPs (-27.6 mV) can attract Hg2+. In a selectivity study, four kinds of heavy metals ions (Cr3+, Pb2+, Cd2+, and Hg2+) were applied in de-ionized (DI) water. It was shown by TEM and UV-Vis spectrophotometry that the AgNPs were specific for Hg2+, which acted as a bridge to induce AgNPs aggregation. The minimum effective concentration (MEC) that could be detected by the aggregation of these AgNPs was 0.938 M, ( 188.2 ng Hg2+/mL water). The optimal working pH range of the AgNPs for Hg2+ detection was pH 7.5 to 10. From a study with tap water spiked with Hg2+ ions, AgNPs were slightly disturbed by ions in the tap water, but the sensitivity towards Hg2+ was exceptional (minimum effective concentration (MEC) is 1.25 M).