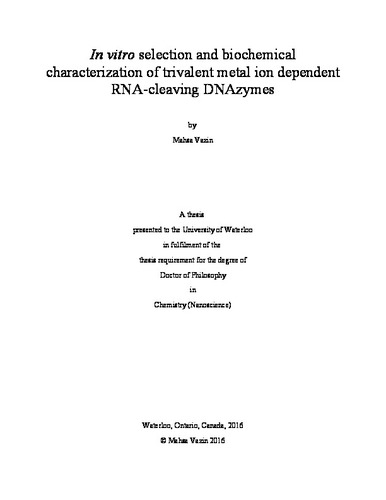 DNAzymes are DNA sequences with catalytic activity. So far, all known DNAzymes have been isolated using the high-throughput in vitro selection method. DNAzymes have been used for analytical, biomedical, and nanotechnology applications. All known DNAzymes require metal ions for activity. Therefore, a particularly interesting direction is the isolation of DNAzymes that function only in the presence of specific metal ion cofactors. Metal-specific DNAzymes can be used for developing metal ion biosensors and also provide insights into the interaction between metal ions and DNA. Since the first DNAzyme was reported in 1994, most metal dependent-DNAzymes have been isolated using divalent metal ions, such as Pb2+, Zn2+, Hg2+, UO22+, Cu2+ and Cd2+. Recently, a few monovalent metal dependent DNAzymes were also reported. However, relatively little is known about trivalent metal ions. Compared to DNAzymes using monovalent metal ions, those using divalent metal ions are usually more efficient. Therefore, we suspect that trivalent metal ions may result in even more efficient DNAzymes. At the same time, trivalent metal ions are also very important for technological applications. Hence, the main goal of this thesis is to select and characterize DNAzymes using trivalent metal ions as cofactors, in the hope of developing biosensors for this category of metal ions. There are three types of trivalent metal ions used in this work, including trivalent lanthanide ions (Ce3+, Yb3+ and Lu3+), Group 3A metal ions (Al3+, Ga3+, In3+ and Tl3+), and Cr3+. Different selection strategies were employed to fulfill each metal ion criteria. Among the various types of DNAzymes, this thesis is focused on those cleaving RNA. In each chapter, the conditions and processes of the in vitro selection with the target metal ion are described and the results are discussed. Biochemical studies of the selected DNAzymes are also presented. The first chapter of this thesis gives a general introduction to DNA and DNAzymes, as well as some of their applications. In chapter two, the in vitro selection with Ce3+ was described, which resulted in the reselection of the Ce13d DNAzyme. Ce13d was previously reported in a Ce4+-dependent selection carried out by another member of the Liu lab. This DNAzyme appears to be an optimal sequence for Ce3+, but it is also highly active with all the trivalent lanthanides, Y3+, and to a lesser extent with Pb2+. Interestingly, by changing the cleavage junction from the normal phosphodiester to phosphorothioate (PS), the enzyme has a decreased activity with lanthanide but shows a high activity with all thiophilic metals. Since Ce13d is an interesting DNAzyme, a carful biochemical study of the enzyme was performed. In chapter three, in order to find more specific DNAzymes that distinguish each lanthanide, two new in vitro selections were conducted with Yb3+ and Lu3+, respectively. The new Lu12 DNAzyme was selected. Lu12 is more active with smaller lanthanides and has the lowest activity with the largest lanthanide, Lu3+. Lu12 was extensively studied and some interesting characters of the enzymes were found, such as a pH-rate slope of 2, using pro-Sp for metal binding at the cleavage site, and acceptance of a diverse range of cleavage junctions. Such properties were never previously reported for any known RNA-cleaving DNAzymes. In chapter four, efforts toward the isolation of DNAzymes specific for the group 3A metal ions using in vitro selection were described. Four independent selections were carried out with Ga3+, In3+, Al3+ and Tl3+; however, no specific DNAzymes were identified. The failure in the selection with this group of metal ions was probably due to the very low pKa of these metal ions in aqueous solution, and also their inability to tightly bind to phosphate group of the DNA molecule. The Tl3+-dependent selection was also repeated with PS-modified library, but the selection still did not work, because Tl3+ can desulfurize the substrate back to the normal PO substrate. While no new DNAzymes were isolated in this work, this study has enhanced our understanding of the interaction between Group 3A metals with DNA, and this information is useful for future in vitro selection works using these metals. In chapter five, the cleavage of the previously selected DNAzyme, Ce13d, by Cr3+ was studied, initially. This preliminary study gives us information about the condition for the efficient activity of Cr3+. Then, two new Cr3+-dependent selections were conducted to isolate a specific DNAzyme. To discourage a Ce13d type of sequence, a blocking DNA and a smaller N35 library were tested separately. However, the Cr3+ selections resulted in obtaining a non-specific cleaving DNAzyme as the major product, and accompanied with a small fraction of 17E, suggesting the Ce13d as an optimal sequence for Cr3+. Cr3+ is a highly important metal and is also an environmental contaminant. This study suggests the possibility of using DNAzyme for Cr3+ detection.