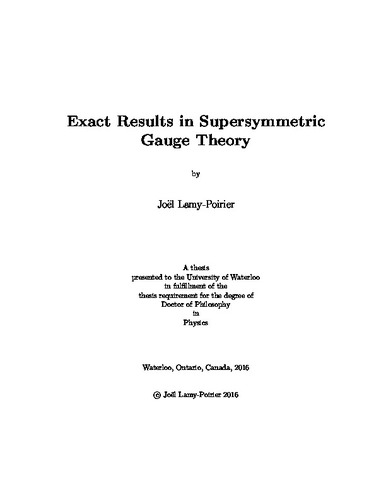 Exact results are a key component for understanding any physical theory. Unfortunately in the context of quantum field theory (QFT) they are in general impossible to obtain, and we need some sort of approximations. However there exists certain non-realistic theories rich in exactly computable quantities, and from those exact quantities we can infer various theoretical implications for realistic quantum field theories. Supersymmetric gauge theories stand out among these non-realistic theories as the best compromise between the contradicting requirements of realism and exact computability. This thesis consists of three projects, in which we explore some exact results in supersymmetric quantum field theory. In the first project we define and describe irregular vertex operators in the H_3^+ Wess-Zumino-Witten model. Irregular vertex operators are a QFT-equivalent of irregular singular points in the theory of differential equations, and their study is motivated by a relation to the partition functions of some asymptotically free four-dimensional N=2 supersymmetric gauge theories. The definition is shown to be compatible with previously defined irregular vertex operators in Liouville theory through a known duality between the H_3^+ and Liouville theories. In the second project we use supersymmetric localization to compute the partition function of N=2 supersymmetric gauge theories on a four-sphere in the presence of a surface defect on a two-sphere subspace, taking the form of a two-dimensional gauged linear sigma model. The result generalizes the known results for separate supersymmetric gauge theories on the separate spaces. We obtain a partition function in the form of a standard partition function on S^4, with a modified instanton partition function and an additional insertion corresponding to a shifted version of the S^2 partition function. In the third project we develop a new method for finding the ground states of fermions in the presence of BPS monopoles. We use it to find the ground states in the case of Abelian BPS monopoles in R^3, which were previously unknown.