Characterization of the effect of the menstrual cycle, estradiol and Fads2 transcript variants on fatty acid composition and enzyme expression 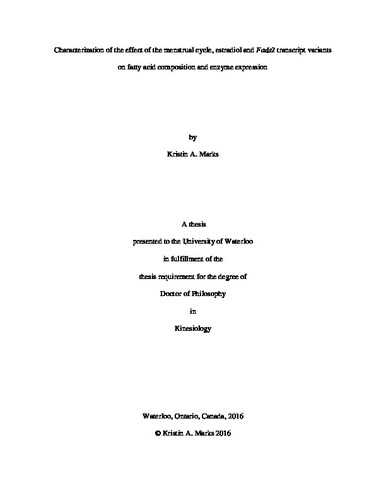 Estrogen is believed to regulate fatty acid composition based on observations of differences between men and women, and changes associated with altered estrogen levels in women during pregnancy, menopause and hormone treatment. Estrogen is consistently associated with increased levels of 18:0, 16:1n-7 and elongase 6, an enzyme in monounsaturated fatty acids (MUFA) biosynthesis. In some, but not all studies, estrogen has also been associated with increased 22:6n-3 and FADS2 expression. FADS2 is responsible for delta-6 desaturase activity, the rate-limiting step in polyunsaturated fatty acid (PUFA) biosynthesis and is necessary for the synthesis of 22:6n-3, which is critical for cardiovascular health and neural development. In this thesis, the effects of subtle changes in estrogen levels during the menstrual cycle in humans, and the estrous cycle in rats, on fatty acid metabolism was examined. In addition, the response of FADS2 to estrogen was examined using MCF7 cells. The presence of multiple FADS2 transcript variants in MCF7 cells was determined, and the role of two variants in PUFA biosynthesis was examined by transfecting them into HEK 293 cells. During the menstrual cycle in women and estrous cycle in rats, increased blood levels of 16:1n-7 and 22:6n-3, and decreased levels of 22:5n-3 were observed when blood estrogen levels were high. The increased 22:6n-3 and decreased 22:5n-3 suggests an effect of estrogen on FADS2 expression and/or activity. In the rat hepatic expression of FADS2 mRNA varied over the cycle, but protein levels did not. However, in estrogen sensitive MCF7 cells, FADS2 mRNA was induced by estrogen. Changes in 22:6n-3 and 22:5n-3 were not observed in the MCF7 cells. Further examination identified multiple transcript variants of FADS2 in MCF7 cells, and demonstrated that the expression of an alternatively spliced transcript variant (FADS2_v2) was considerably higher. Notably, this variant lacked the N-terminal cytochrome-binding domain that is critical for activity, suggesting that it may not be functional. In transfected HEK 293 cells, indirect evidence of delta-6 desaturase activity was observed for the full length wild type variant (FADS2_v0/1) but not for FADS2_v2. When the variants were co-transfected, FADS2_v2 interacted with and inhibited FADS2_v0/1. This work helps further understanding of the relationship between estrogen, lipid biosynthetic enzymes and fatty acid status that is important for determination of dietary requirements of 22:6n-3 for women throughout the lifespan.