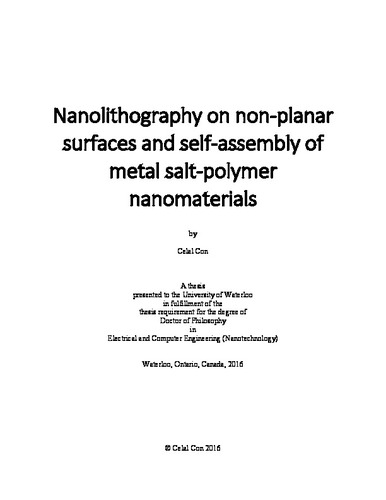 This thesis is focused on fabrication of high aspect ratio nanostructures on non-planar surfaces using evaporated electron beam resist (Part I), and a novel fabrication methods of high resolutionhigh-resolution surface nanostructures using metal salt: polymer nanocomposites self-assembly (Part II). Various top-down and bottom-up nanopatterning techniques are currently available with the rapid progress in instrumentation and material engineering. However, patterning on non-planar surfaces of various materials still remains an overwhelming challenge because the conventional resist coating method, spin-coating, works well for only planar surfaces such as a flat wafer. On the other hand, the ability to pattern any given surface at the nanoscale, in particular surfaces with high inherent roughness or with pre-patterned micro-scale features, opens new perspectives in various fields from multi-scale biomimetics to optoelectronics. Part I (Chapter 1-4) of the present thesis aims to address this issue using evaporated electron beam resist. Electron beam lithography (EBL) is a versatile technique for creating arbitrary patterns on substrates with sub-10 nm resolution. Contrary to conventional lithography techniques, EBL was previously shown to be able to pattern non-planar surfaces using modified lithography system to adjust the beam position along z-axis, spray coating of the resist, and evaporation of the resist. Among them, evaporation of the resist is more favorable as it can be done on any irregular surfacesurfaces using commonly available thermal evaporation equipment. Yet, previous evaporated resist materials suffer from low resolution and sensitivity, as well as poor dry etching resists for subsequent pattern transfer to the sub-layer. Here, evaporation of polystyrene electron beam resist is studied which was used to pattern on irregular surfaces such as the cantilever of atomic force microscope and side surface of an optical fiber. Furthermore, in order to drastically increase the resist’s dry etching resistance, chromium that is a hard etching mask material was successfully incorporated into the resist by co-evaporating or Cr and polystyrene. This nanocomposite resist enabled the fabrication of very high aspect ratio structures by electron beam lithography followed by dry plasma etching. As this material can be evaporated on any substrate, including non-planar surfaces, it can open new era to spectroscopy and bio-sensing techniques. Part II (Chapter 5-6) presents a low-cost bottom-up fabrication techniques for creatingto create dense surface nanostructures without long-range ordering. Recently, micro- and nano-structured surfaces have become a hot topic in nanotechnology where performance of devices is enhanced due to such surface nanostructuring. Such structures are often called as a “smart” coating on the surfaces where they could provide wetting/de-wetting, adhesion, thermal and/or electrical conductivity, super-hydrophobicity, self-cleaning, anti-icing, anti-reflectivity, etc. Bottom-up techniques, such as self-assembly lithography, areis undoubtedly much more cost-effective than top down lithography techniques for applications that do not need long range ordering. Block co-polymer lithography, colloidal lithography, sol-gel processing, wet/dry etching are some commonly used techniques of bottom-up fabrication. However, fabrication of those structures with low costslow-cost as well as high performance is still challenging. Here a novel fabrication method is introduced, which involves spin-coating of metal salt : polymer composite followed by its phase-separation upon thermal annealing. Both spin-coating and thermal annealing are very low- cost processes. With this method, after pattern transfer to the substrate using the self-formed metal salt islands as mask, dense and high resolutionhigh-resolution nanostructures over large area without long-range ordering is achieved, which offered greatly enhanced super-hydrophobic and anti-reflective properties.