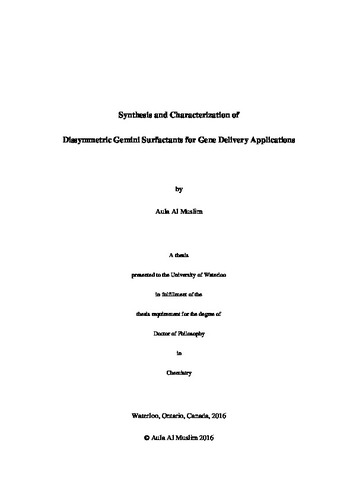 The lack of safe and efficient gene- delivery methods has been constantly a limiting obstacle to human gene therapy. Viral vectors have been superior in delivering exogenous DNA or RNA into a foreign cell due to their ability to integrate and generate their genetic material within a cell. However, their immunogenicity and the unfortunate deaths came as a consequence to these trials and shifted gears toward a safer realm. Histones are able to complex and compact DNA inside the nucleus. In the same manner, cationic polymers, lipids and gemini surfactants are able to complex DNA. Tremendous efforts have been made to enhance gene delivery with cationic moieties, such efforts are development of more compounds, and investigation of structure-activity correlation to improve transfection. Gemini surfactants are made of two surfactant monomers which are connected at the head group area with a spacer linker. They are able to compact and complex DNA efficiently and they can be synthesized at the bench top, with relatively low cost. Two series of dissymmetric gemini surfactants, pyrene-based surfactants, pyr-3-n (n= 8, 12, 14, 16, and 18), and 12-3-n surfactants with n= 14, 16, and 18 were rationally designed and synthesized. Due to the bulky nature of pyrene ring and the increased hydrophobicity due to its presence, these surfactants exhibited lower values of critical micelle concentrations (CMC) with early onset of micellization compared to their symmetric m-3-m gemini surfactants. The dissymmetry with increased hydrophobicity with increasing the alkyl tail in 12-3-n surfactants caused dramatic reductions in CMC values. These dissymmetric surfactants have higher aggregation abilities due to increased intermolecular hydrophobic interactions within the micelle. Both of the groups showed higher degrees of micelle ionization, which is advantageous to gene delivery applications. This is mainly due to the easier access of anions to the surfactants within the micelle in order to reduce the electrostatic repulsion caused by the ammonium head groups. The lack of understanding of how DNA influences the arrangement of vector components during the complexation of DNA, as well as their interaction with biological membranes is still a major barrier hindering the transfection abilities of non-viral vectors. Hence in this work we characterized the arrangement of the gemini surfactants and phospholipids that make up the transfection vector (both in the presence and absence of DNA) as well as the effect of these components on model biological membranes using Brewster’s Angle Microscopy (BAM). Two model membrane systems were characterized, DPPC/Cholesterol and POPC/Cholesterol. The first monolayer system exhibited a rigid solid phase at the biological surface pressure threshold (30-35mN/m). The latter is more flexible due to the presence of unsaturation within the POPC alkyl chains, which makes it more fluid than the first system. In this study, in the presence or absence of DNA, structural arrangement within the gemini surfactant alone or within the vector components led to interactions with the model membranes, hence affecting its fluidity. All the gemini-DNA complexes from both groups caused the membranes to become more fluid, thus internalization of the vector may become possible. Further characterization of the nanoparticles (polyplexes) formed by formulating the GS and the DNA into aqueous solution was conducted through the measurement of the particle size and the zeta potential to determine the stability of the complexes at higher charge ratio. Smaller particles were formed at higher charge ratios with net positive charge, indicating the complete and successful complexation of DNA with the gemini surfactants. These nanoparticles were tested in the presence or absence of DOPE in MG-63 bone cancer cells, and HEK-293 kidney cells. Unfortunately, Pyrene-3-n surfactants transfection results obtained from flow cytometer were not useful due to the interference of the pyrene emission peak with the GFP signal. However, the pyrenyl surfactants were tested by ELISA in COS-7 cell lines, and showed poor transfection, with the highest protein expression was that of pyrene-3-8, which gave better results than the positive control itself (Lipofectamine plus). This can be attributed to the loose packing of the DNA which was shown in the physical characterization results (the zeta potential= <30mV) and the average size was below 200 nm at 1:10 and 1:5 ratios. The 12-3-n transfection complexes showed high toxicity imparted by these dissymmetric gemini surfactants, with relatively good transfection results were shown by 12-3-16 in the presence of DOPE and in its absence. DOPE`s presence did not improve the transfection and it increased the overall toxicity of the complex with a significance of 0.985. Over all, the level of the in vitro transfection observed by ELISA assay for the pyr-3-m gemini surfactants proved to be generally poor, with the exception of pyr-3-8, which showed remarkable transfection ability with protein expression of 8000pg and 15000pg after 48 h, and 72 h incubation periods, respectively. In addition to that, low toxicity was observed for all of the pyr-3-m surfactant complexes. These two surfactants (pyr-3-8 and 12-3-16) have emerged as promising candidates for non-viral gene delivery in different cell lines.