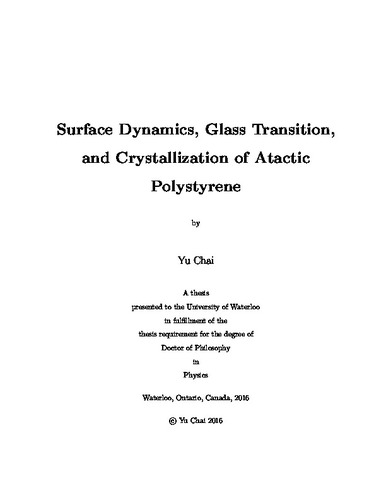 How polymers behave near the glass transition is one of the deepest questions in condensed matter physics. In the past two decades, the surface dynamics, glass transition, and crystallization of polymer thin films have attracted much attention as they are not only scientific questions but also fundamentals of modern polymer industry. However, there are still many phenomena that are not clear, such as whether the glass transition is a real phase transition; whether there is an enhanced mobile layer near the free surface and how thick it is; whether the glass transition temperature reduction is caused by the free surface; whether some polymers cannot crystallize; etc. Here we try to gain insight into these questions. In this thesis, there are six chapters. The first chapter is introduction, in which some basic concepts and a literature review are presented. The second chapter contains the experimental details, in which the experimental techniques and data analysis methods are discussed. Chapter three, four, and five focus on three different research areas; however, these topics are related to each other. In chapter three, we conduct a novel stepped film levelling experiment to study the surface dynamics of polymer films near the glass transition temperature, in which several subtopics are involved, such as molecular weight dependent levelling, levelling under soft confinement, and ultra-thin films levelling. In chapter four, we find the direct evidence of the crystallization of atactic polystyrene, and systematically study the growth and melting kinetics of these crystals. In chapter five, the thermal expansivity of polystyrene thin films is measured using ellipsometry. These results confirm the validity of the recently proposed simple model, which connects the existence of an enhanced mobile layer near the free surface to the glass transition temperature reduction in thin films. The last chapter is concluding remarks and future work, in which a brief summary is included and some possible future studies are proposed.