Why Did I Apologize? Apology Motives and Offender Perceptions in the Aftermath of Workplace Conflicts 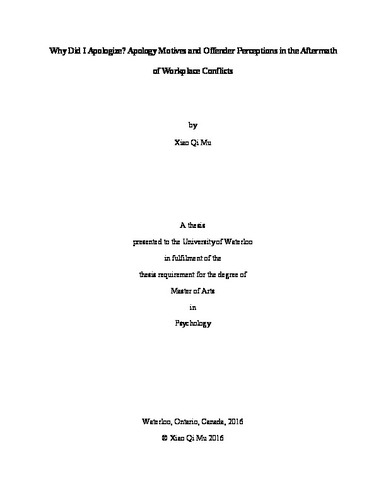 Despite an abundance of research demonstrating the importance of apologies in restoring damaged relationships, relatively little is known about the offender perspective after apologizing. Recent research on apology suggests that for offenders, apologizing may be an aversive experience, and refusing to apologize can provide psychological benefits (i.e., power, control, self-worth). In contrast, the present research seeks to explore why individuals do apologize after harming co-workers. Using both qualitative and quantitative methodologies, four apology motives were identified: (1) Self-Censure, (2) Relational Concerns, (3) Expedience, and (4) Fear of Sanctions. Then, we drew on Motivated Action Theory to examine the relationship between apology motives and offender perceptions in the reconciliation process. Results indicate that apology motives influenced offender perceptions of victim forgiveness and relational reconciliation. Those who apologized to preserve valued relationships, to correct the wrongdoing, and to resolve the conflict quickly perceived their apologies to be effective in eliciting forgiveness and reconciliation. Paradoxically, those who apologized to avoid further conflict perceived their apology to be ineffective in promoting forgiveness and reconciliation. Implications and future directions for research are discussed.

Xiao Qi Mu (2016). Why Did I Apologize? Apology Motives and Offender Perceptions in the Aftermath of Workplace Conflicts. UWSpace. http://hdl.handle.net/10012/10710