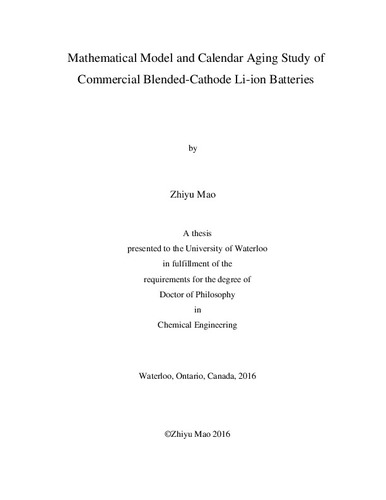 Commercial blended-cathode Li-ion battery (LIB) systems has been dominating the burgeoning market for portable energy, ranging from consumer electronics to automotive applications. In order to successively improve the energy-power density and usage life of blended-cathode cells, an understanding in terms of the electrode design, electrochemical performance, and cell aging are necessary. A mathematical model based research approach is effective to quantitatively estimate all factors in the complicated system has been developed in this work, which will be beneficial for research and development of Lithium ion battery technology. In this thesis, a model based composition prediction technology for the of unknown commercial blended Li-ion battery cathodes is developed. It includes three steps of combined experimental and modeling methods. The electrochemically active constituents of the electrode are first determined by coupling information from low-rate galvanostatic lithiation data, and correlated with Scanning Electron Microscope (SEM) with Energy Dispersive X-Ray Analysis (EDX) analyses of the electrode. In the second step, the electrode composition is estimated using a physics based mathematical model of the electrode. The accuracy of this model based approach has been assessed by comparison of this electrode composition with the value obtained from an independent, non-electrochemical experimental technique involving the deconvolution of X-ray powder diffraction (XRD) spectra. Based on the prediction technology, the commercial LIB with the composition of LiNixMnyCo1-x-yO2 - LiMn2O4 (NMC-LMO=70:30 wt%) cathode was accurately delineated. Then, a physics based mathematical model, including the two dimensions of single particle and electrode levels, is developed to describe the electrochemical performance of the NMC-LMO blended cathode. The model features multiple particle sizes of the different active materials and incorporates three particle-size distributions: one size for the LMO particles, one size for the NMC primary and one size for NMC secondary particles which presumably are agglomerates of NMC primary particles. The good match between the simulated and experimental galvanostatic discharge and differential-capacity curves demonstrates that the assumption of secondary particles being nonporous (i.e., solid-state transport) is reasonable under the operating conditions of interest in this case up to 2C applied current. In the modeling, a thermodynamic expression for diffusive flux and some parameters such as the effective electronic conductivity have been described and measured. A sensitivity of the fitted model parameters including kinetic rate constants and solid-state diffusivities has been analyzed. Using the multi-particle model, the different Galvanostatic Intermittent Titration Technology (GITT) experiments with varying pulse currents and relaxation periods for a NMC-LMO blended lithium-ion electrode have been described. The good agreement between the simulated and experimental potential-time curves shows that the model is applicable for all GITT conditions considered, but is found to be more accurate for the case of small current pulse discharges with long relaxation times. Analysis of the current contribution and the solid-state surface concentration of each active component in the blended electrode shows a dynamic lithiation/delithiation interaction between the two components and between micron and submicron NMC particles during the relaxation periods in the GITT experiments. The interaction is attributed to the difference in the equilibrium potentials of the two components at any given stoichiometry which redistributes the lithium among LMO and NMC particles until a common equilibrium potential is reached. Moreover, the model can also be used to fit the galvanostatic charge curves from the rate of C/25 to 2C by adjusting model parameters. Through the comparative study with galvanostatic discharge experiment, the asymmetry of capacity contribution of each component during both charge and discharge, i.e., LMO contribution increases during discharging but decreases during charging when the C-rate is raised. Dynamic analysis of the blended cathode shows that this asymmetric charge/discharge behavior of the blended electrode can be attributed to the difference in the equilibrium potentials of the two components depending on Li concentration and electrode composition and to the difference in the rate of solid-state diffusion of Li and kinetics limitations in LMO and NMC. At last, a calendar life under various aging conditions has been studied, including analysis at various states of charge (SOC) i.e., 35℃-0% SOC, 58℃-0% SOC, 35℃-100% SOC and 58℃-100% SOC, for a commercial NMC-LMO/graphite blended lithium-ion battery. Through the analysis of post-mortem for the 280 days aged cell at 58℃-100% SOC with the remaining capacity of 55%, the loss of cycleable lithium is the predominant reason of capacity loss, which can lead to a passivation layer formation on the surface of graphite and gas generation. The fitting result of ‘open circuit voltage (OCV)-model’ indicates the about 40% active materials have not been utilized due to the lack of cycleable lithium and gas generation in the aged pouch cell. A non-destructive pressure-loading experiment has been implemented, which demonstrated a recovery of the capacity of the aged cell by 21%, and the reason of redistribution of gas bubbles under pressure inside the pouch cell has been described in detail.