Graph C*-algebras and the Abelian Core 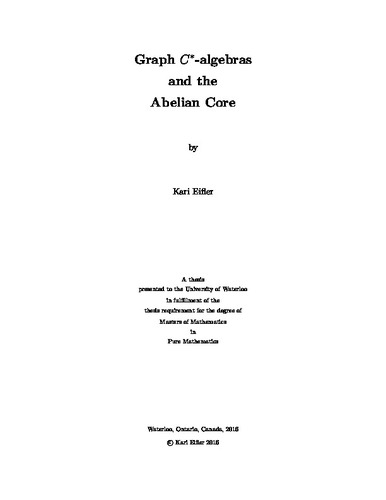 We may associate to a C*-algebra to the directed graph E by associating edges to partial isometries and vertices to pairwise orthogonal Hilbert spaces which satisfy some additional conditions. Such graph algebras were first studied by Cuntz and Krieger in 1980. Because the structure theory of the C*-algebras is related to the combinatorial and geometrical properties of the underlying graph, graph algebras have gained a lot of attention. Our report will cover the basic terminology and properties, as well as look at multiple examples whose C*-algebras generated by the graph will be familiar to the reader. We introduce two well known uniqueness theorems, the Gauge-Invariant Uniqueness Theorem and the CK-Uniqueness Theorem. We conclude with an investigation of the 2012 paper by Nagy and Reznikoff on the abelian core. Their paper gives an additional uniqueness theorem which considers the spectrum of elements in the graph C*-algebra.