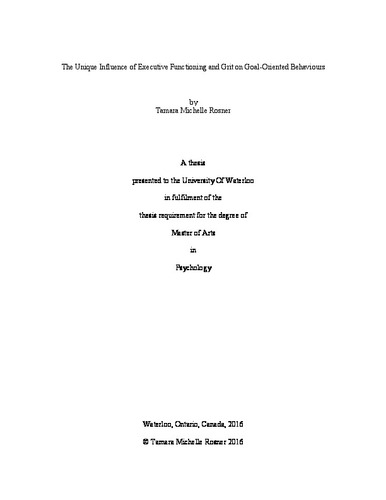 Within the social psychology literature, four different behaviours have been highlighted as playing a particularly salient role in goal-motivation: promotion, prevention, locomotion, and assessment. Personality traits and cognitive skills also have been examined in relation to goal-motivated behaviours; however, these literatures have remained curiously separate. As such, the overarching goal of this work was to examine how aspects of personality and cognition uniquely and jointly contribute to goal motivation and, by extension, to examine the impact of goal-motivation on real-world outcomes in a young adult sample. Study 1 examined goal-motivation in relation to grit, a personality trait that influences perseverance and passion when pursing long-term goals, and executive functioning, a collection of cognitive skills that are used for the purpose of goal-attainment. Study 2 extended this work by incorporating neuroticism as another predictor of goal-motivated behaviours, and by examining the direct and indirect effects of these behaviours on the affective experiences and academic accomplishments of an undergraduate population. Across the two studies, it was generally observed that grit uniquely predicted behaviours that are concerned with taking action to move toward a goal (i.e., promotion and locomotion), whereas executive functioning predicted preventative behaviours that ensure a goal is not compromised (i.e., prevention). The outcome measures of affect and GPA were predicted by the predictor variables of neuroticism, executive functioning, and grit, as well as by the goal-motivated behaviours that were examined. Overall, the findings of this work suggest that personality traits and cognition make unique contributions to goal-oriented behaviours in young adulthood and have important implications for both affective and academic outcomes in this age group.