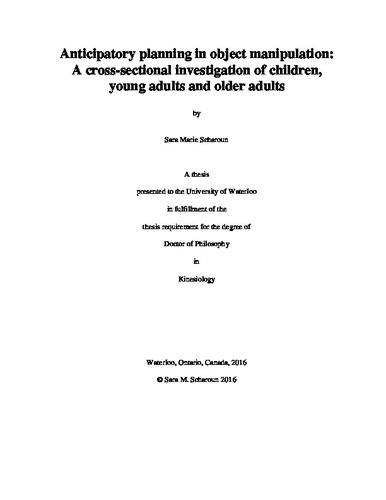 Over a series of five studies, this work aimed to investigate anticipatory planning in object manipulation across the human lifespan. Main objectives were to: (a) understand the influence of the movement context; (b) delineate the role of handedness; (c) characterize the influence of familiarity with an object; (d) investigate independent and cooperative movements; and (e) outline similarities and differences across the lifespan. Chapter 2 established a foundation for the thesis with right and left handed young adults. Findings supported the hypothesis that manual asymmetries do not influence anticipatory planning. Furthermore, despite end-state comfort reaching ceiling, kinematic data provided evidence for an increase in cognitive demand in pantomime compared to actual object use. Chapter 2 therefore served as proof of concept for manipulating contextual information to alter the cognitive demands of the task. Chapter 3 compared data to a group of left and right handed older adults. Similar to Chapter 2, manual asymmetries were not influential. Evidence of end-state comfort did not differ in young and older adults; however, after separating older adults into two groups, those who did not display the effect spent a longer time in the final approach to the target in pure pantomime. This was attributed to the increased reliance on feedback-dependent corrective mechanisms with increasing age. To quantify similarities and differences among children, young and older adults, Chapters 4, 5 and 6 assessed anticipatory planning across the lifespan. The main findings of the thesis are highlighted in the results of Chapter 6. Object use involves the direct perception of affordances, and indirect selection of motor programs based on action intentions. The ability to interact with objects in the environment is thus rooted in learned knowledge. With cognitive development, improvements in multisensory integration, and familiarity with objects, children become more proficient in anticipatory planning. As such, behaviours emulate a gradual transition from a reliance on habitual actions executed successfully in the past, to the recognition of affordances and incorporation of intentions into actions. Likewise, with decline in cognitive and motor processes, the behaviour of older adults (ages 71+) reflects a gradual transition back to habitual behaviours. Actions thus reflect stimulus-driven responses, as opposed to those which consider affordances and intentions.