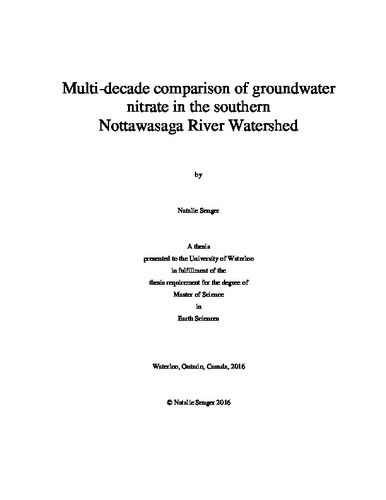 The Nottawasaga River Watershed is host to the Lake Algonquin Sand Aquifer (LASA), an unconfined aquifer that consists of glaciolacustrine sands and provides water supply to rural residents, for household use, and for applications in agriculture. Previous studies, conducted between 1979 and 1983, measured nitrate in the LASA, and found concentrations that greatly exceeded the drinking water limit (10 mgN/L) and were measured as high as 103 mgN/L (Hill, 1982; Starr, et al., 1987). In these studies, groundwater was tested in domestic wells, groundwater seeps, and multi-level wells situated among agricultural fields. The historically high nitrate in the LASA was linked to agricultural activities, specifically those most focused on potato farming (Hill, 1982). Further to this, a lack of labile organic carbon (LOC) in the aquifer sediments, which acts as an electron donor for denitrification, the natural N cycling process responsible for converting nitrate to harmless N2 gas (Starr & Gillham, 1993). As part of the current study, nitrate was measured in domestic wells, groundwater seeps, and multi-level wells in 2010 and 2011, to compare the relative change in nitrate in the LASA over that past ~30 years. Statistical differences between the historical and current sample groups were evaluated using a Mann-Whitney rank-sum test for the domestic wells and groundwater seeps. Both of the groups were statistically different between the two dates, however, domestic wells were lower and groundwater seeps were higher, in nitrate. Multi-level wells showed varied results for comparing nitrate with those sampled in 1982 and 1983. Samples within a few meters of the water table had the most distinct changes in nitrate, whereas samples at depth were relatively similar. Increases in nitrate in MC2 could be attributed to the removal of a woodlot and subsequent cultivation which occurred in 2005. The depression of the water table also resulted in a change in the source for set sample points in MC4 and resulted in lower groundwater nitrate than historically measured. The depression of the water table also introduced oxygen and nitrate rich waters to greater depths below the ground surface than what was previously measured. Overall, the mean concentration of nitrate in the multi-level wells was less than the historical data. The decrease in nitrate for the domestic wells and multi-level wells might be related to changes in land management practices over the past three decades. Source identification for nitrate was constrained with the use of nitrate isotope ratios and artificial sweeteners. Domestic wells, groundwater seeps, and multi-level wells were all dominantly identified as nitrified chemical fertilizer, according to the dual isotope plot of nitrate. Artificial sweeteners were detected in 31% and 35% of the domestic wells and groundwater seeps, respectively, and were excellent tracers for septic wastewater. Further investigation into the proportion of nitrate derived from wastewater showed that septic systems contributed poorly to the nitrate pool in the LASA. Oxic conditions extended several meters below the water table in the LASA and provided conditions where nitrate could exist at high concentrations. Nitrate removal via denitrification was evident in all datasets, however it was often incomplete and did not remove nitrate entirely. The production of N2O in domestic wells and multi-level wells was generally attributed to denitrification in oxygenated groundwaters. In domestic wells, where nitrate was not present, and at the deepest sample points in the multi-level wells, redox conditions were classified having undergone nitrate, sulfate, and iron reduction. However, multi-level well data outlines that this occurs at depths of at least 15m below the water table. Groundwater seeps were less reduced and did not show evidence for sulfate or iron reduction. Therefore, the capacity of the aquifer to remove nitrate is not sufficient to cope with the amount of nitrate leached from agricultural practices.