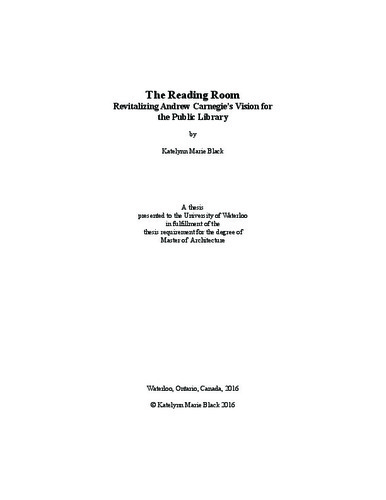 At the turn of the 20th century, Andrew Carnegie, the richest man in America, was transforming society through the endowment of thousands of free public library buildings to communities around the world. Carnegie conceived of his library with the common man in mind; building hundreds of simple structures that dispelled the notion that libraries should be monumental institutions available only to elite members of society. Each Carnegie Library was designed using a set of parameters in which every element of the building was reflective of his goal to make the act of reading accessible for everyone. In its most basic form, the architecture of the Carnegie Library was a single room dedicated to the sole purpose of reading books; a simple architectural idea that formed the standard for community library design around the world for the better part of the next century. Today, the introduction of digital technology as a source of information and connection has transformed the world we live in, leaving us to ponder the urban relevance of public institutions, including the Carnegie Libraries. The historical purpose of these libraries - providing access to knowledge through reading - seems to be slowly disappearing behind the screens of a digital society, while their very structures are being lost to the concrete jungle of cities constantly striving to construct taller, more efficient buildings. However, despite their seemingly inconsequential stature among the monumental architecture of contemporary society, many of these small buildings have continued to thrive as vital public institutions within their respective communities. This thesis intends to study the continued success of the Carnegie Library typology through its architecture, investigating the ways in which these historic structures have been revitalized over the last hundred years to meet the needs of our continuously evolving society. The building that was the Carnegie Library at one time served as a portal to a seemingly unlimited source of knowledge through books and it is the intention of this thesis to celebrate this legacy of reading through the study of the continued urban relevance of these historic landmarks.