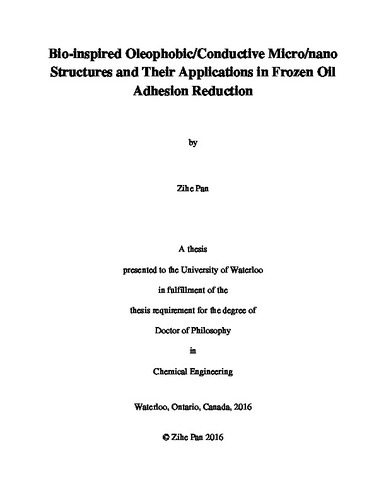 Inspired by the excellent superhydrophobicity and self-cleaning properties of the lotus leaf, numerous superhydro-oleophobic micro/nanostructures have been developed which mimicked biological systems. These structures have broad applications in industrial processes, especially oil transportation, oil/water separation and anti-fouling applications where oil adhesion is a critical factor. Although the adhesion properties of oils have been well explored on a variety of surfaces at ambient environment, low temperature behaviors were rarely reported especially when the oil is frozen under a frigid environment. For instance, there are cases in which oils are stuck or frozen onto the walls of engines or pipelines resulting in a large drag force thus leading to excess energy consumption and potential instrument malfunction. In this research project, the initial stage was mainly focused on developing an effective approach to construct well-defined superhydro-oleophobic microstructures and investigating the effects of structures and surface chemistry on superoleophobicity. In this stage, two different chemical modification approaches were applied to both flat and micropillared PDMS: 1) vapour deposition of trichloro (1H, 1H, 2H, 2H-perfluorooctyl) silane (FDTS) on cured polydimethylsiloxane (PDMS) elastomer surface (FDTS coated PDMS); 2) blending FDTS with the liquid PDMS precursor before curing (FDTS blended PDMS). Surfaces with varied oleophobicity were fabricated to investigate the effects of superhydro-oleophobicity on the reduction of frozen oil adhesion as characterized by knock-off tests. The relationship between the oleophobicity, which ranged from oleophilic flat surfaces to superoleophobic micropillars, and the reduction of oil adhesion at low temperatures was examined. It was observed that reduced contact angle hysteresis (CAH) led to reduced adhesion strength. By blending FDTS into PDMS micropillars, 60% adhesion strength reduction compared with flat surfaces was achieved. In order to eliminate the frozen oil effectively, electrical de-freezing was proposed by passing electrical current through the top surface layer to induce joule heating effect. To achieve this, epoxy-silver flakes composite micropillars were developed, demonstrating electrical conductivity and superoleophobicity. The effects of resistivity and superoleophobicity on the reduction and elimination of frozen-oil adhesion have been systematically studied, showing that the larger the resistivity and the oleophobicity, the less force was needed to remove frozen-oil droplet. After developing the electrically conductive polymer composite micropillars for eliminating frozen oil adhesion, we have extended this work, aiming to reduce the amount of conductive Ag flakes in the composite and make stretchable multifunctional composite elastomers. Electrically conductive and superoleophobic PDMS has been fabricated by embedding Ag flakes (SFs) & Ag nanowires (SNWs) into microstructures of the FDTS-blended PDMS elastomer achieved in the first stage of this project. A series of surface analyses and characterizations showed that highly conductive and superoleophobic surfaces were indeed obtained with a relatively low surface coverage of conductive fillers. A significant improvement to the conductivity was further achieved by using SNWs to partially replace the SFs. The stretchability and conductivity were examined under external strain, which showed that the as-prepared samples are highly stretchable and reversible. The electrical resistance of the SFs/SNWs embedded surface was less dependent on the strain due to the presence of the SNWs, creating a bridging effect and allowing current to flow consistently even as the silver particles were stretched apart from each other. This research demonstrates a simple approach to transform insulating elastomers into functional composites with a desired surface oleophobicity and electrical conductivity, which is of great help for the development multifunctional superoleophobic structures and their applications in oil adhesion reduction at low temperatures.