Structure and Function in Early Glaucoma 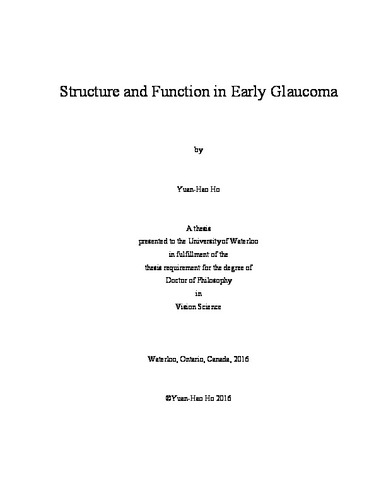 Glaucoma is a group of diseases, which exhibit a characteristic optic neuropathy and may result in progressive visual field loss. The most important risk factor is raised intraocular pressure (IOP) usually secondary to reduced aqueous outflow through the anterior chamber angle. It is the second leading cause of blindness globally. The diagnosis of glaucoma is difficult, as there is currently no widely-accepted “clinical standard” for diagnosis, although “progressive structural optic nerve and/or nerve fiber layer damage” is currently the most commonly accepted diagnostic criterion. Current treatments are to reduce the level of IOP, either by topical medication or surgery. Unfortunately, medical intervention frequently takes place after visual field loss has occurred. Consequently, much effort has been placed into the early diagnosis of glaucoma, in order to prevent damage. Visual field tests have been a popular clinical method to determine functional defects, and they are essential for managing and diagnosing glaucoma. Various methods and test strategies have been developed. Computerized threshold static perimetry involves determining the dimmest stimulus that can be seen at a number of pre-determined test point locations. An examiner can interpret the resulting pattern of defect; also, disease progress can be followed over time. Visual fields should not be interpreted in isolation but in conjunction with other clinical findings1. Standard automated perimetry (SAP) is our oldest and best documented, computerized, subjective visual function test. Threshold tests are commonly used for both detection and follow-up of glaucoma patients. Different testing strategies and different stimuli have been developed with expectations of raising the sensitivity for early detection of glaucoma-related functional change, such as short wavelength automated perimetry (SWAP), high-pass resolution perimetry (HRP), frequency doubling technology (FDT) and Flicker Defined Form (FDF). FDF is a temporally driven illusion in which background elements and stimulus elements are flickered in counterphase at a high temporal frequency, creating an illusory contour at the boundary between the background and the stimulus. It has been described to be a predominantly magnocellular-based stimulus due to its dependence on high temporal frequencies and its perceived low spatial frequency. The random flickering dots throughout the field of view and the complex nature of the stimulus, a phase-difference percept requiring higher order processing. Clinically, besides testing for deficits in function, measuring of retinal structure plays an important role in the diagnosis of early glaucoma. Damage results in characteristic signs in the retinal nerve fiber layer, the parapapillary retina and the optic nerve head, due to the oriented distribution of the nerve fiber in the retina. Scanning laser tomography (SLT; Heidelberg Retina Tomograph, Heidelberg, Germany) is a confocal scanning laser device that provides accurate and reproducible topographical information of the optic disc and peripapillary retina. Other methods such as optic disc photography, retinal nerve fiber layer photography, scanning laser polarimetry, and optical cohererence tomography are also designed to detect structural changes. By analyzing the neuroretinal rim within the optic disc, the SLT provides evidence of glaucoma related structural change, such as changes in the cup to disc ratio and notching and narrowing of the neuroretinal rim. Measurements were affected by age, but it is fairly robust to astigmatism and working distance. Studies have shown correlation between visual field test results and optic nerve head structural measurements. The correlation analysis of structure and function was performed to evaluate the spatial relationship. It has been proposed that both structural and functional diagnostic methods have unique value, but the combination of methods might provide early evidence for glaucoma diagnosis and management. The objectives of this thesis are: 1. To determine the normal sensitivity and confidence limits for FDF perimetry as a function of age; 2. To determine the test-retest repeatability of FDF perimetry for stable glaucoma; and 3. To investigate the structure function relationship in glaucoma using FDF perimetry and the HRT. Normative data for different perimeters are well established. It is critical to establish normal sensitivity for the FDF perimetry. Age related sensitivity loss throughout the visual field has been previously reported. Confidence limits for normality will be established in this thesis, as only then can we examine the ability of the new clinical test to detect early glaucoma. Measures of function and structure are both relevant and required for the early diagnosis of glaucoma. The relationship between the points tested in the visual field and corresponding positions at the optic nerve head have been previously described. Comparing the FDF perimetry results with the HRT optic nerve head results has the potential to be of significant value in the diagnosis of glaucoma.