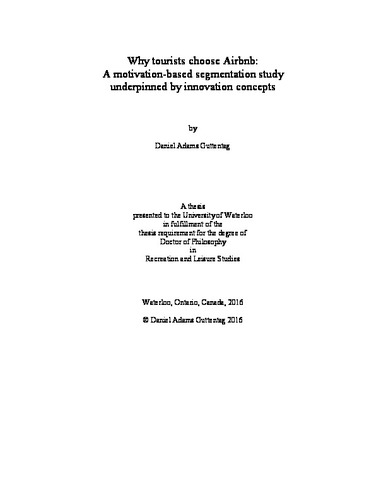 Every night, hundreds of thousands of tourists choose not to stay in a traditional tourism accommodation establishment, such as a hotel, and instead pay to stay in the residence of a stranger, found online via the company Airbnb. Airbnb is an online platform through which ordinary people rent out their spaces as accommodation for tourists. Established in 2008, Airbnb has grown very rapidly over the past several years, to the point that it is now often discussed in terms of its current or future impacts on the traditional accommodation sector. Given its recent emergence, only limited research has so far examined Airbnb. In particular, few researchers have explored the important question of why so many tourists use the service. Consequently, the purpose of this study was to investigate why tourists choose to stay in Airbnb accommodations. The study centred on exploring the pull motivations that attract tourists to Airbnb, segmenting Airbnb users in accordance with these motivations, and then profiling the resulting segments. Airbnb choice also was more generally explored by examining numerous additional variables, including elements of Airbnb’s brand personality, the communication channels influencing awareness and initial use of Airbnb, Airbnb’s possible role as a substitute for traditional accommodations, and satisfaction and loyalty towards Airbnb. Finally, the performance expectations of Airbnb were compared with different classes of hotels in order to assess Airbnb’s potential weaknesses and thereby provide a more complete picture of Airbnb choice. This research was guided primarily by concepts associated with disruptive innovation and the diffusion of innovations. Disruptive innovation describes a process through which new products, which underperform in comparison with existing products’ key attributes, encroach upon a market by introducing an alternative package of benefits generally centred around being cheaper, simpler, smaller and/or more convenient. This framework provides a natural lens through which to view the rise of Airbnb, as traditional accommodations seemingly outperform Airbnb in many key areas, but Airbnb tends to be cheaper and offer some additional alternative benefits. The diffusion of innovations is a broad field examining topics related to how and why innovations spread and are adopted. Most relevant for this study, the diffusion of innovations literature has shown that an innovation’s “relative advantage” and its “compatibility” with adopters directly influence its adoption, and communication channels play a fundamental role in the spread of innovations. The research instrument used for this study was a ten-minute online survey that was completed by tourists who had stayed in an Airbnb accommodation during the previous year. Respondents were recruited through various sampling frames, with most of the final sample coming from Facebook and Mechanical Turk. Over 900 completed surveys were received. The analysis involved an exploratory factor analysis that revealed relationships between the motivational items considered, followed by a cluster analysis that divided the respondents into distinct market segments. A variety of other descriptive and inferential statistics also were used to profile the segments and to conduct additional analyses of the data. The survey included 17 different motivational items related to the choice of Airbnb, and the exploratory factor analysis grouped them into five factors – Interaction, Home benefits, Novelty, Sharing economy ethos, and Local authenticity – with two additional important items (‘low cost’ and ‘location convenience’) excluded due to a lack of inter-item correlations. Looking at the aggregate levels of agreement with the different motivations, respondents indicated that they were most strongly attracted to Airbnb by its practical attributes, and somewhat less so by its experiential attributes. The cluster analysis divided the respondents into five segments – Money savers, Home seekers, Collaborative consumers, Pragmatic novelty seekers, and Interactive novelty seekers – based on their relative levels of agreement with the different motivations. When comparing Airbnb’s expected performance along various attributes with that of different hotel classes, it was found that Airbnb was generally expected to outperform budget hotels/motels, underperform upscale hotels, and have mixed outcomes compared to mid-range hotels. Other important findings from the study include that the majority of respondents had used Airbnb as a substitute for hotels, and traditional and electronic word-of-mouth were the primary communication channels influencing Airbnb awareness and adoption. Numerous practical and conceptual implications of the findings are discussed. In particular, the comparative levels of agreement with the different motivations were examined to highlight the importance of practical considerations in driving Airbnb choice. Additionally, Airbnb’s marketing strategy is critiqued as inconsistent with many guests’ primary motivations for using the service. The motivational characteristics and broader profiles of the five segments are discussed to provide direct marketing implications for Airbnb, its hosts, and traditional accommodations. Airbnb’s performance expectations are shown to indicate some, but not complete, consistency with the concept of disruptive innovation, while also demonstrating the value in using a demand-side perspective to assess the concept. This study additionally questions Airbnb’s claim that it complements rather than competes with hotels, and more broadly demonstrates that Airbnb presents a genuine threat to the traditional accommodation sector. Areas for potential future research also are described.