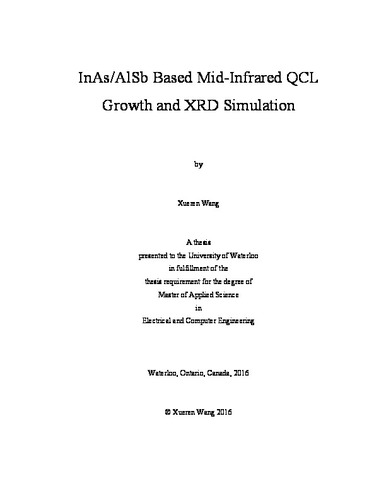 In the past two decades, mid-infrared (MIR) quantum cascade laser (QCL) research has been rapidly developed and has resulted in an enabling platform for the remote sensing and metrology. QCL is designed by spatial confinement in quantum well structures on a nanometer scale, enabling the transitions between the electron confined states. In order to obtain the particular characteristics via quantum engineering, the material growth needs to be precisely controlled across the large number of layers. In this work, the growth condition of InAs/AlSb based MIR-QCL, grown by molecular beam epitaxy (MBE), is investigated. A low defect density growth result is observed by employing the optimized growth condition. Laser devices with disk mesa or ridge waveguide are fabricated, and the further electrical characterization exhibits the device lasing at 3.4 μm with a threshold current density of around 2.1 kA/cm2. The superlattice average layer thickness is determined by using high resolution X-ray diffraction (HRXRD), which is considered as one of the non-destructive analysis technique to extract the information about the thin film constructions. Comprehensive modeling built and simulation results are analyzed and discussed based on the HRXRD ω-2θ scanning curve, yielding valuable information about the full structure device growth result. The interface related simulations are performed by using RADS software to investigate the relationship between the strain distribution and the relative intensities of the SL reflections in XRD.