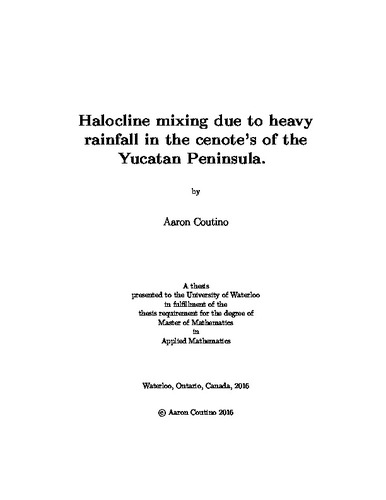 The hydrodynamics of the Yucatan peninsula are extremely important due to the strain on water resources caused by increasing development along the eastern coast. The geology of the peninsula is unique geologically in that it is dominated by porous limestone (karst) which results in seawater permeating underneath a fresh water lens. This geology allows for large fractures or cave networks to form underground and for large sink holes to form on the surface. These sink holes are traditionally called cenotes. The goal of this research was to investigate how heavy rainfall impacts the system and to what extent mixing occurs. This was investigated using sensor data and through numerical simulations. Using salinity and temperature measurements along with rainfall data we were able to strongly match heavy rainfall events (such as the hurricanes in 2011 and 2013) to spikes in salinity and increases in temperature. Through using wavelet analysis we were able to find longer term trends in the data along with the first eight tidal components. Small scale experiments were performed to observe the impact that rainfall has on a stable stratification. Through this observation an analogue of oscillating jets was devised since rainfall is near impossible to simulate numerically. This analogue was then experimentally shown to produce similar results to rainfall. A numerical model (SPINS) was then used to simulate an experiment. A column of tracer was also added to the simulation to model a column of potassium permanganate. The simulation was analysed using spanwise averaged (through $y$) 2D plots, 2D slices (at a particular y or z value) and 3D volumetric plots. These revealed the generation of a turbulent region which propagated away from the jets and entrained quiescent fluid. In addition to traditional parameters such as horizontal velocity $u$, density $\rho$ and kinetic energy 1/2 (u^2+v^2+w^2), new parametrizations for mixing and stirring were introduced. These were used to analyse how the dye was impacted by the jets, specifically it's interaction with the turbulent front. This work is the first step to understanding this complicated physical system and has links across many disparate disciplines, from turbulence theory to anthropology.