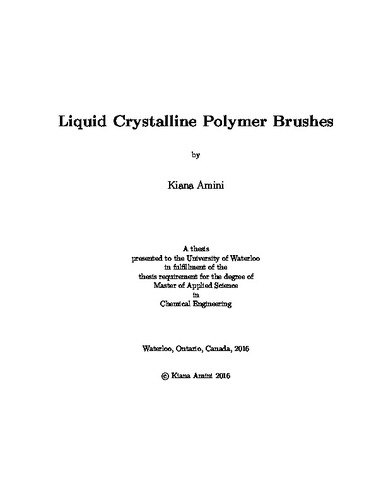 Liquid crystalline polymers are one of the best examples of successful interaction between sciences. This interdisciplinary area of study has benefited from popularity of polymers and uniqueness of liquid crystals. Liquid crystals are well-known for their applications in designing liquid crystalline displays (LCDs). Polymers, specifically polymer brushes, are attractive due to their ability in surface tailoring. The use of liquid crystalline polymer (LCP) brushes is of interest since they can lead to novel and enhanced methods for surface modification. One example of the potential application of LCP brushes is in designing alignment layers for LCDs. In order to design devices based on the LCP brush, it is necessary to understand the physical structure and behaviour of this system under different conditions. To accomplish such understanding, computational and theoretical study of the system can provide advantageous insights. This project uses the self-consistent field theory to investigate the phase behaviour of liquid-crystalline polymeric brushes immersed in solvent. The polymers are modelled as freely-jointed chain consisting of N rigid segments. The isotropic interactions between the polymer and the solvent are treated using the standard Flory-Huggins theory, while the anisotropic liquid-crystalline (LC) interactions between rigid segments are taken into account using the Maier-Saupe theory. For weak LC interactions, the brush exhibits the conventional parabolic-like profile, called conventional brush (CB), while for strong LC interactions, the polymers order near the substrate into a dense brush, which is called liquid crystalline (LC) brush. Free energy associated with each structure is calculated and the stable solutions are identified. It is shown that there is a first-order transition between the CB and LC phase. A phase diagram is created to show the effect of different system variables on the phase behaviour.