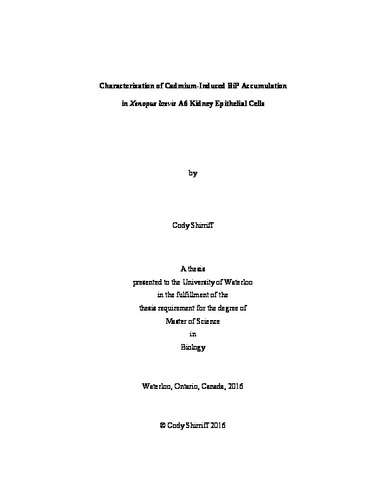 In vertebrates, cadmium exposure is found to cause respiratory, neurological and kidney disorders. At the cellular level, cadmium can damage or modify proteins resulting in the production of toxic protein aggregates. The formation of protein aggregates can be inhibited by the accumulation of heat shock proteins (HSPs), a class of molecular chaperones. Immunoglobulin binding protein (BiP) is an endoplasmic reticulum (ER)-resident heat shock protein that binds to nascent proteins on entry into the ER and assists in their folding and assembly. Little information is available on the effect of cadmium on BiP accumulation or function in vertebrates. In this study, cadmium treatment of Xenopus laevis A6 kidney epithelial cells induced a dose- and time-dependent increase in BiP accumulation that was the result of de novo transcription and translation. In cells recovering from cadmium exposure, elevated levels of BiP were still detectable after 48 and 72 h. The exposure of cells to a low concentration of cadmium at 30 °C greatly enhanced BiP accumulation compared to cadmium treatment at 22 °C. Glutathione levels may modulate the UPR since treatment of cells with the glutathione synthesis inhibitor, buthionine sulfoximine, enhanced cadmium-induced BiP accumulation. Finally, immunocytochemistry revealed that cadmium-induced BiP accumulation occurred primarily in a punctate pattern in the perinuclear region. In some cells treated with 200 μM cadmium or 30 μM MG132, relatively large BiP antibody staining structures were observed that co-localized with a Proteostat dye that has been used to detect aggregated protein or aggresome-like structures. Analysis of individual z-planes revealed that BiP was detected in the center of the Proteostat-stained structures. These structures were also observed in cells treated with 100 μM cadmium chloride at 30 °C or 100 μM cadmium chloride after pretreatment with the glutathione inhibitor, buthionine sulfoximine. This study has shown for the first time in amphibians that cadmium chloride induced an increase in BiP levels, which is likely to counteract the toxic accumulation of aggregated protein in the ER. The sequestration of protein aggregates by a molecular chaperone may be significant to the understanding of the pathology of certain diseases that result in intracellular inclusion bodies such as Alzheimer’s disease, Parkinson’s disease and amyloidosis.