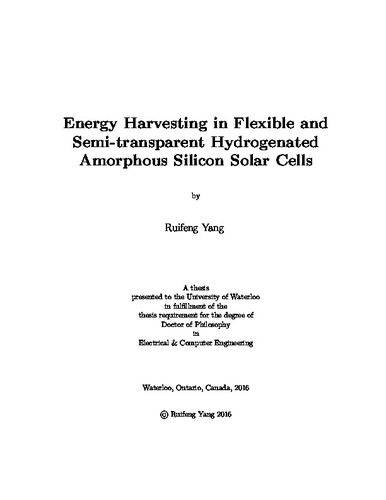 The goal of this study is to design, characterize, and fabricate efficient hydrogenated amorphous silicon (a-Si:H) photovoltaic (PV) modules, and semi-transparent solar cells on thin, mechanically flexible, optically transparent plastic substrates for energy harvesting applications. The cells are deposited on thin flexible plastics at low temperature (120~ 150 °C). In the first part of study, a-Si:H n-i-p solar cells were fabricated using a plasma enhanced chemical vapor deposition (PECVD) and the deposition conditions were optimized to maximize their efficiency. To improve light absorption, we engineered the front window layer by optimizing p-layer thickness and bandgap (Eg). The best a-Si:H n-i-p solar cell showed open circuit voltage (Voc) of 0.67 V, short circuit current density (Jsc) of 7.92 mA/cm2, fill factor (FF) of 53.73 %, and energy conversion efficiency of 2.86 %. Using developed deposition recipes, the a-Si:H PV modules were designed and fabricated on a 10 by 10 cm2 polyethylene-naphthalate (PEN) substrate which consists of 72 rectangular cells. The sub-cells were connected in series forming eight strings with connection pads at the ends, so that the strings of 18 sub-cells were connected in parallel using the external blocking diodes. The typical a-Si:H PV module showed Voc of 12.78 V, Jsc of 8 mA/cm2, FF of 53.8 %, and average efficiency of 3.05 %. The PV module performance is similar to that of individual solar cells, which means good scalability of our module fabrication process. In the second part, a-Si:H n-i-p solar cells were inverted to fabricate a-Si:H p-i-n solar cells. In this device structure, p-type buffer-layer was introduced to improve the interface between aluminum doped zinc oxide (AZO)/p-layer. The optimum device showed Voc of 0.885 V, Jsc of 8.88 mA/cm2, FF of 52.01 %, and efficiency of 4.09 %. In the last part of this study, semi-transparent solar cells were fabricated both on glass and plastic substrates to demonstrate feasibility of building integrated photovoltaics (BIPV), based on the a-Si:H p-i-n cells in the second part. To overcome the mechanical stress inside films between AZO and plastic, the barrier-layer coating was used to prevent the delamination which is frequently encountered between plastic substrate and transparent conductive oxide (TCO) layer. Our semi-transparent a-Si:H solar cells showed the efficiency of 4.98 % and 4.77 % for the cells fabricated on glass and plastic substrates, respectively. In addition, the semi-transparent a-Si:H p-i-n solar cell was also used as radiation detector within the visible part of the spectrum. From the Ne spectral lines, the micro-plasma spectral from radiation detector obtained response comparable with fiber optic detector.