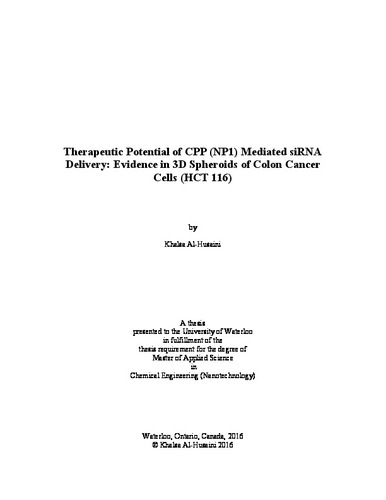 At the forefront of revolutionizing medicine, gene therapy provides a promise to treat a wide range of diseases by regulating defective genes. RNA interference (RNAi) holds great potential as a therapeutic route due to its high efficiency and specific posttranscriptional gene silencing process, which can be triggered by small interfering RNAs. siRNAs are a class of 21 to 23 nucleotide-long double-stranded RNA molecules that inhibit the expression of a specific gene by the degradation of its complementary messenger RNA (mRNA). Despite its potential value, a number of problems remain as major obstacles to clinical applications of therapeutic siRNAs, related to its large molecule weight, negative charge, hydrophilicity, sensitivity to nuclease degradation and short plasma half-life of less than ten minutes. These unfavorable properties lead to instability of naked siRNA under physiological conditions, rapid clearance from the blood stream, and inability to cross target cell membranes. Therefore, siRNAs as a potential therapeutic agent require an efficient and safe delivery carrier that will facilitate their biological functions. A variety of carriers have been developed to deliver siRNA and maximize its therapeutic effects including viruses, lipids, polymers, dendrimers, peptides, and nanoparticles. Cell penetrating peptides (CPPs) have emerged as a promising candidate due to their rapid and high efficient internalization and low toxicity. CPPs mediate siRNA delivery through endocytic pathways or by directly crossing the targeted cell membrane. As most of preclinical models were carried out in monolayer cell culture, for in vitro testing, it is not physiologically relevant to in vivo models, where three-dimensional tissues are the object. On the other hand, development of more biologically relevant models for early drug screening will result in reduction of animal models required, which tend to be expensive and time consuming. Therefore, various 3D cell culture techniques have been developed to produce multicellular spheroids, mainly for cancer drug discovery. Multicellular spheroids are in vitro micro-scale tissue analogs, where cell clusters form by self-assembly. Spheroids with radii of 200 μm and larger will develop three different zones of proliferating cells on the outside, quiescent cells on the inside and a necrotic core due to nutrient and oxygen transport limitations. Spheroids harbor several features that make a more physiological platform for early drug discovery due to the following reason: spheroids of multicellular 3D architecture mimic the in vivo microenvironment of tumor and extracellular matrix deposition that are found in vivo but absent in monolayer culture; spheroids of in vivo solid tumor models develop a necrotic core beside the hypoxia present in many cancers; the tight cell-cell interactions are comparable to those in in vivo tissues. Taken together, spheroids provide an improved model for testing in vitro siRNA delivery of the current interest, compared to regular monolayer cell culture. The aim of this study is to develop 3D spheroids of HCT 116 colon cancer cell line using the hanging drop method and evaluated NP1, a novel CPP (STR-H16R8) developed by Dr. Chen’s group, to assist siRNA delivery, to silence specific targeted genes for therapeutic purposes. Morphological characterization of 3D spheroids generated in hanging drop plates clearly indicates that HCT 116 cells were able to form compact spheroids within 3 days and start to form three distinct layers of proliferating, dormant and necrotic cells, which closely mimic the features of tumors in vivo. Furthermore, H&E stained spheroids showed large cohesive cells with apparent epithelial phenotype, and large atypical nuclei with occasional prominent nucleoli, which closely mimic the features of tumors in vivo but not present in 2D cell monolayer. NP1 demonstrated a high gene knockdown efficiency, both in 2D and 3D cell culture, with higher uptake in 2D compared to 3D. NP1-Bcl-2-siRNA showed a 85% knockdown efficiency in 2D and 53% in 3D cell culture. NP1-VEGF-siRNA induced a 72% and 51% reduction in mRNA level in 2D and 3D cell culture, respectively. At the protein level, NP1-Bcl-2-siRNA complexes exhibited significant inhibition of the Bcl-2 protein compared to non-treated cells in western blot results. 3D spheroids showed apoptosis resistance compared to 2D cells. These results demonstrated that compact MCTS closely mimic the features of tumors in vivo in term of simulating important tumor characteristics including hypoxia, formation of ECM and necrotic core, anti-apoptotic features and their resulting therapy resistance. The higher silencing efficiency and apoptosis rate observed in 2D compared to 3D clearly indicate that 2D monolayer cells on plastic plates are not physiologically relevant to tumor microenvironment and overestimate the efficacies of tested drugs. NP1 as a siRNA carrier in both cell culture models, efficiently protect, deliver siRNAs and maintain high silencing efficiency.