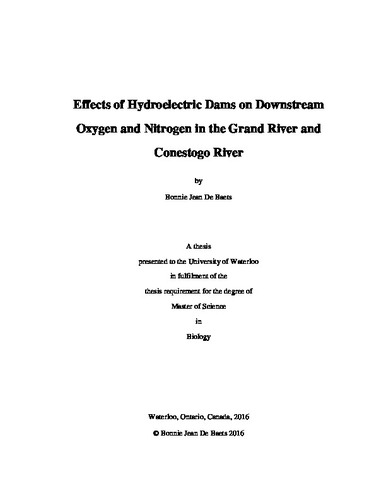 As the global population has increased, so has the need for water supply and energy. Dams have been a point of contention for many years. In some regions they are increasing in importance, but new constructions are becoming more massive and more geographically remote. In other regions, dams have been called into question, as their overall impacts are not fully understood and what is known may not be universally applicable, particularly as the structures age. The Grand River, Ontario, watershed has a tendency towards high nitrogen concentrations and low nighttime dissolved oxygen (DO) concentrations. Two large dams and their associated reservoirs were studied; Belwood Lake on the Grand River, and Conestogo Lake on the Conestogo River. The focus of this study was to investigate how these bottom-draw dams alter the downstream oxygen cycling and nitrogen cycling. This was done by direct, in-field measurements taken above and within the reservoirs, as well as directly below the dams and downstream. The study was conducted over three years (2008-2010). Seasonal, vertical profile and diurnal measurements were taken for temperature, DO, δ¹⁸O-O₂, NO₃⁻, NH₄⁺, total dissolved nitrogen (TDN) and N₂O. The DO cycle is altered downstream of the reservoirs, particularly at Belwood Lake where, despite reaeration measures to mediate the low DO concentrations released from the hypolimnion of the stratified lake, downstream respiration still causes the DO to fall below minimum standards. This effect was shown to be seasonal as a result of management practices. Full recovery of the DO downstream of Belwood Lake to above reservoir conditions was not observed before the next impoundment. Recovery was seen downstream of Conestogo Lake. The reservoirs behaved as a sink for NO₃⁻ in the spring, as they filled from the winter runoff. As the water was released through the summer, the stored NO₃⁻ was then released downstream, thus acting as a source. There was evidence that the reservoirs were a source of NH₄⁺ in both spring and summer. High N₂O was measured directly below the dams on occasion; but not further downstream. This study has provided insight into the behavior of the area directly below bottom-draw dams, which is often ignored or overlooked. It has also shown that there can be differences between reservoirs and dams of similar morphology, depth, and retention in the same basin. Further research should be conducted at locations further downstream to see the true nature of the downstream environment.