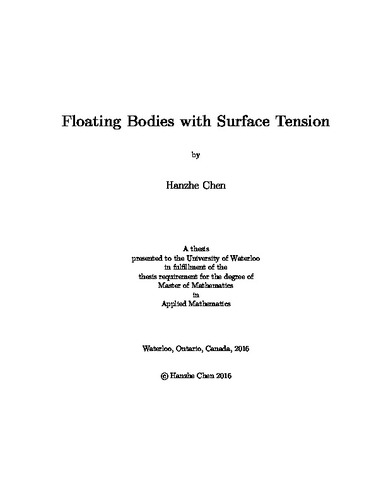 Capillary phenomena have been studied by mathematicians and physicists for hundreds of years. In this thesis, both two-dimensional(2D) and three-dimensional(3D) bodies floating on an unbounded reservoir are studied based on the Young-Laplace equation. We reconsider the 2D floating cylinder problem studied in a groundbreaking paper of Bhatnargar and Finn from 2006. We derive the total energy relative to the undisturbed state and the total force in vertical direction. The relation between the total force and the derivative of the total energy with respect to the height of the centre of the cylinder relative to the undisturbed fluid level is found. The number of equilibria, the floating configurations and their stability are also studied. In the 2D floating square problem, we rederive the floating configurations and their stability in the no surface tension case. Allowing surface tension, one example with a special contact angle is considered. We show that there is one unstable equilibrium of the floating square with a horizontal side. In the 3D floating object problem with radial symmetry, the shooting method is applied to obtain the fluid height and radial distance from the vertical axis numerically in terms of the inclination angle parameter. In the vertical cylinder problem, the relation between the total energy and the total force in vertical direction is found to be consistent with 2D cylinder case. In the floating ball problem, a non-monotone relation between height of centre and the wetting angle is found. We also give an example of two floating configurations with the same height. More study of the 3D floating ball problem is anticipated.