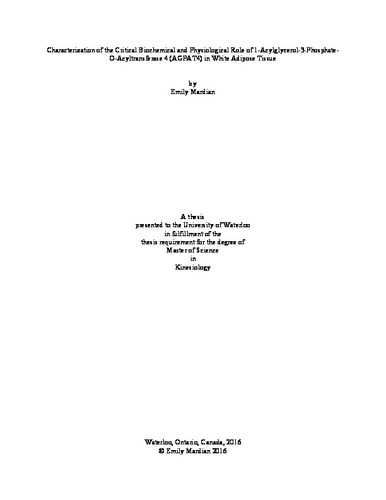 White adipose tissue (WAT) is an endocrine and lipid storage organ that is imperative to mammals for the maintenance of energy homeostasis. WAT depot size and triacylglycerol (TAG) content is determined by the regulation of lipid metabolism in adipocytes, as well as by the number of adipocytes. The two main processes in TAG metabolism are hydrolysis (or lipolysis), and synthesis, which encompasses both de novo fatty acid synthesis, and complex lipid synthesis via the Kennedy pathway. The number of adipocytes is regulated primarily by adipogenesis, the differentiation of preadipocytes into fully mature adipocytes. Dysregulation of adipocyte lipid metabolism or adipogenesis can lead to pathological conditions such as obesity, diabetes, and cardiovascular disease. Thus, the maintenance of a healthy physiological state is critically dependent on normal adipose tissue development and function. The 1-acylglycerol-3-phosphate-O-acyltransferases (AGPATs) catalyze the second step in the Kennedy pathway, acylating lysophosphatidic acid (LPA) with a fatty acyl-CoA at the sn-2 position, forming phosphatidic acid (PA). LPA and PA are bioactive signalling molecules that may affect the differentiation of adipocytes, while PA is also a building block for the synthesis of TAG and phospholipids that are components of expanding adipocytes. Changes in the activity of cellular AGPATs may therefore affect adipose tissue biology through multiple mechanisms. Little is known however, about the role of most of the AGPAT homologues in WAT. In this study, we aimed to better understand the in vivo function of AGPAT homologue 4 (AGPAT4) in WAT by using a gene ablation model of Agpat4 to assess the role of this enzyme in three important white adipose tissue regulatory processes: lipogenesis, adipogenesis, and lipolysis. It was hypothesized that lack of AGPAT4 would reduce TAG synthesis, resulting in decreased whole body weights due to reductions in individual adipose tissue depot masses. Since TAG synthesis is required for adipocyte differentiation, it was further hypothesized that loss of AGPAT4 would impair differentiation. We predicted a compensatory reduction in adipocyte lipolysis would also be observed. Contrary to these predictions, it was found that AGPAT4 ablation resulted in a 40% increase in the mass of epididymal WAT, without causing a significant change in whole body weights, food intake, activity, oxygen consumption, or substrate oxidation. This was accompanied by a 26% increase in TAG content in epididymal WAT and an increase in the average adipocyte size within this depot, with no observed changes in the gene expression of adipogenic markers. The expression of genes encoding LIPIN1 and DGAT1 showed significant upregulation in epididymal WAT however, there were no changes in gene expression or protein content of other markers of lipogenesis. Agpat4-/- epididymal WAT showed a decrease in ATGL, P-HSL S563, and P-HSLS660 content, decreased total triolein lipase activity, and dibutyryl-cAMP stimulated glycerol release, indicating a decrease in lipolytic activity. In contrast, no differences in any measures of lipogenesis, lipolysis, or adipogenesis were observed for perirenal WAT with the exception of a compensatory upregulation of the other AGPAT isoforms. Notably, this compensation was not observed in epididymal WAT, which paradoxically exhibited an increase in PA content. Our findings suggest that induction of the other AGPAT isoforms may be responsible for maintaining normal adipocyte differentiation and function in perirenal WAT, but that this compensation does not occur in epididymal WAT, which consequently becomes dysregulated.

Emily B. Mardian (2016). Characterization of the critical biochemical and physiological role of 1-acylglycerol-3-phosphate-O-acyltransferase 4 (AGPAT4) in white adipose tissue. UWSpace. http://hdl.handle.net/10012/10651