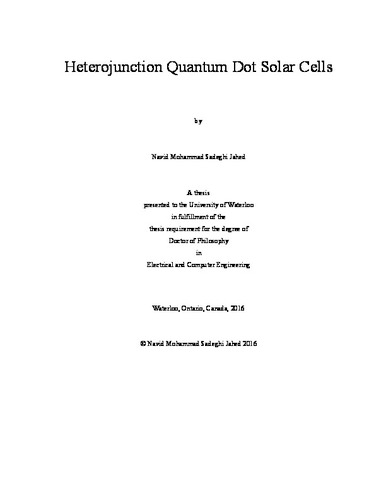 The advent of new materials and application of nanotechnology has opened an alternative avenue for fabrication of advanced solar cell devices. Before application of nanotechnology can become a reality in the photovoltaic industry, a number of advances must be accomplished in terms of reducing material and process cost. This thesis explores the development and fabrication of new materials and processes, and employs them in the fabrication of heterojunction quantum dot (QD) solar cells in a cost effective approach. In this research work, an air stable, highly conductive (ρ = 2.94 × 10-4 Ω.cm) and transparent (≥85% in visible range) aluminum doped zinc oxide (AZO) thin film was developed using radio frequency (RF) sputtering technique at low deposition temperature of 250 °C. The developed AZO film possesses one of the lowest reported resistivity AZO films using this technique. The effect of deposition parameters on electrical, optical and structural properties of the film was investigated. Wide band gap semiconductor zinc oxide (ZnO) films were also developed using the same technique to be used as photo electrode in the device structure. Sputtered ZnO thin films with high electron mobility (30 cm2V-1s-1) is achieved at a deposition temperature of 250 °C to eliminate charge collection losses in the solar cell device. The developed AZO and ZnO thin films are a suitable substitute for the expensive indium tin oxide (ITO) and low carrier mobility titanium oxide (TiO2) films respectively. To increase the junction area in the final device, a novel and scalable method was developed for fabrication of upright ordered arrays of ZnO nanowires (NWs) combining top-down etching of ZnO film and silica sphere nanomasking in fluorine-based plasma. The electrical properties of the resulted NWs can be controlled using this approach. The effect of plasma etching parameters and surface treatments on the structural and surface properties of the ZnO NWs were investigated. A high throughput drop-casting process was next developed using colloidal quantum dots (CQDs) for the formation of light absorbing quantum dot film (QD-film) to replace the widely used input-intensive spincoating technique. The QD-film provides controllability over thin film properties via tuning the properties of the CQDs building blocks. Crack-free QD-films were formed with single-step drop casting of CQDs from solution (solution-phase ligand-exchange) and Layer-by-layer (L-B-L) replacement of long ligands with short charge transport-compatible ones (solid-phase ligand-exchange). Charge carrier dynamics were also studied at the CQDs and ZnO interface using photoluminescence decay analyses in order to optimize the selection of CQDs for efficient electron transfer which leads to a better working device. For the first time, the electron transfer in a ZnO/CQD/MoO3 structure was studied to eliminate the effect of other non-radiative pathways and determine the true electron transfer at the CQD/ZnO interface. Effect of CQD size and ligands on the transfer efficiency was discussed. The device concepts and theoretical treatment of QD-film/ZnO were also highlighted to gain insight on the CQD and ZnO optical and electrical parameters affecting the performance of the QD solar cell device. The developed materials and processes were employed for the fabrication of planar and nanowire heterojunction QD solar cell devices. For planar structure power conversion efficiency of η=2.3% at 100 mW/cm2 solar irradiance were achieved.