Diabetes among Aboriginal Peoples in Canada: Prevalence and Predictors, 1991-2011 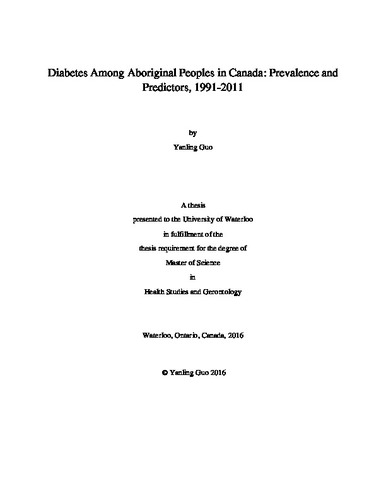 Introduction: Diabetes mellitus is one of several prevalent chronic diseases that has severely impacted Aboriginal Canadians. In addition to high prevalence rates, the characteristics of diabetes among Aboriginal peoples also include early disease onset and severe complications. In general, type 2 diabetes (T2DM) accounts for 90% of all types of diabetes and is recognized to be preventable by improving modifiable factors such as obesity, physical inactivity, unhealthy diet, cigarette smoking and alcohol consumption. Social determinants of health such as low social economic status, household food insecurity, and other cultural factors also play an important role in predicting the development of T2DM by affecting modifiable factors. It is necessary to apply a comprehensive framework that includes both modifiable factors and social determinants in understanding the risk factors of T2DM. Objective: There are two main objectives in this study. The first is to measure trends in diabetes prevalence and related factors from 1991 to 2012 among Aboriginal adults who were classified as Treaty Indians or Registered Indians. The second objective is to examine the associations between modifiable factors and social determinants and T2DM among off-reserve First Nations and Métis adults. Method: In the first part of this study, four cycles (1991, 2001, 2006 and 2012) of the Aboriginal Peoples Survey (APS) were used to examine the changes in prevalence rates of diabetes and related factors during the past twenty years. All rates were age-standardized using the age distribution of 2011 census. The second part of this study focused on the most recent 2012 APS. A set of binary multivariable logistic regression models were applied to examine the associations between independent variables and T2DM. Results: The prevalence rates of all types of diabetes among off-reserve living Registered Indian adults increased from 12.43% in 1991 to 14.54% in 2001, then declined slightly in 2012. The mean age of diabetes diagnosis also increased from 2001 to 2006, then declined in 2012. The prevalence of obesity and regular alcohol consumption has shown an increasing trend, while the prevalence of cigarette smoking has shown a decreasing trend. The percentage of people who have obtained a high school diploma and above increased largely from 1991 to 2012. The median personal income rose from $ 11,582 to $ 18,098. The employment rate increased from 1991 to 2001, and then declined sharply in 2012. Focused on the 2012 APS, the second part of this study found that being overweight or obese, consuming no alcohol or excessive amounts of alcohol, experiencing very low household food security, and having attended residential schools were significant factors that associated with T2DM. Conclusion: This study confirmed the high prevalence rates of diabetes among Aboriginal peoples in Canada. The prevalence rate of all types of diabetes among off-reserve living Registered Indian adults was still at least two times higher than the national average in 2012. In addition, the pattern observed in diabetes and age onset of diabetes is not evident for the major modifiable factors. This study also found that obesity was an important modifiable factor for T2DM. In addition to modifiable factors, social determinants such as education, income, and household food insecurity, and residential school exposure are also important in predicting T2DM among Aboriginal adults. Therefore, a comprehensive framework including modifiable lifestyle factors, social determinants and cultural factors is needed to be applied in understanding factors of T2DM among Aboriginal peoples. It is also urgent to call upon policy changes on improving household food security, healing residential school trauma, and reducing poverty to provide extra social supports for vulnerable populations.