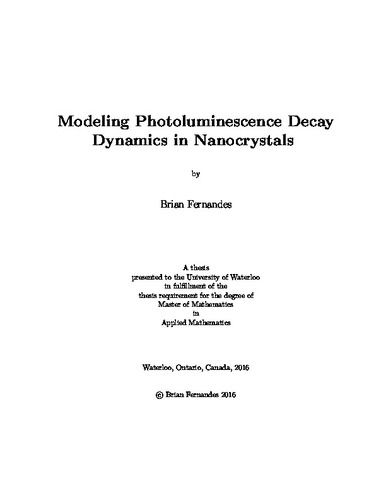 Photoluminescence resulting from donor-acceptor recombination in gallium oxide nanocrystals was studied at short and long time scales for different nanocrystal sizes. A model for the intensity decay was formulated with two different donor distributions, one with donors uniformly distributed throughout the volume, and the other with donors restricted to the surface of the nanocrystal. These models were fit to experimental data and the effect of an exclusion distance about the acceptor was explored. A model for the spectrum of emitted light was developed using the same two donor distributions. A modification to the Coulomb interaction was derived by taking into account the dielectric mismatch between the nanocrystal and the surrounding medium. A Monte Carlo algorithm was developed for generating an ensemble of nanocrystals and recording the emitted spectrum. This allowed the model to be expanded to include a distribution of crystal sizes and an arbitrary acceptor position.