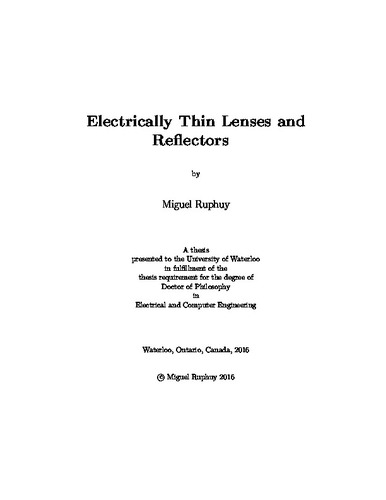 In physics, specially in optics, ray models are commonly used to simplify problems and further design devices for a diverse variety of applications. This diversity runs from mass-oriented products, such as cameras, to more sophisticated needs, such as wireless communications. Ray models frequently make use of Snell law to describe the rays' trajectories. Snell law is omnipresent practically in all optics applications; however, its applicability is limited to homogeneous half space. Nowadays, advanced materials could further improve the characteristics of current devices and expand the applications by using inhomogeneous media. Designers and scientists typically avoid working with inhomogeneous media due to difficulties in predicting wave behaviour. In this thesis, I present a general and simple formulation to predict refraction from inhomogeneous electrically-thin media. This formulation can accurately describe refraction from inhomogeneous slabs just as Snell law predicts the refracted ray in a half space system. Naturally, the first application that comes to mind are lenses used to form images and concentrate energy. Similarly, parabolic reflectors could potentially be substituted by inhomogeneous media devices with planar geometries. In this work, the models and concepts usually applied in optics are implemented and adjusted to electrically smaller devices for microwave applications. Based on ray models, an electrically-thin flat lens and reflector are introduced. The lens and reflector are designed to exhibit a refractive index gradient which results in a phase shift profile at the exiting face of the device. The concept of phase shifting to converge rays is validated with a case study at 10 GHz with a lens and a reflector having a diameter of 8 $\lambda$. High contrast in the fields within the proximity of the focal point demonstrates the performance of the lens. Additionally, the lens has appreciably low spherical aberration. To obtain this characteristic, in the proposed design methodology, the electrical thinness of the lens is crucial. A complete analysis of monochromatic spherical aberration is performed and compared to classical gradient index rods. Given the costly computation burden of large structures when using full-wave simulations, an analytic model is proposed to model 2D (constant refractive index in one direction) inhomogeneous electrically-thin media. For 3D lenses (radially varying refractive index in two dimensions), the analogous analytic model is developed using infinitesimal dipoles. This model exhibits good agreement with full-wave simulations and requires lower computation resources than that of numerical simulations. In addition to lenses and reflectors, there are important applications for electrically-thin inhomogeneous films. For instance, monostatic cloaking to conceal objects from radars is introduced here. An important decrease in the radar cross-section ratio is demonstrated.