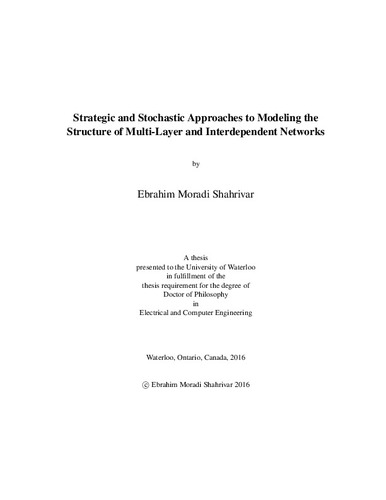 Examples of complex networks abound in both the natural world (e.g., ecological, social and economic systems), and in engineered applications (e.g., the Internet, the power grid, etc.). The topological structure of such networks plays a fundamental role in their functioning, dictating properties such as the speed of information diffusion, the influence of powerful or vulnerable nodes, and the ability of the nodes to take collective actions. There are two main schools of thought for investigating the structure of complex networks. Early research on this topic primarily adopted a stochastic perspective, postulating that the links between nodes are formed randomly. In an alternative perspective, it has been argued that optimization (rather than pure randomness) plays a key role in network formation. In such settings, edges are formed strategically (either by a designer or by the nodes themselves) in order to maximize certain utility functions. The classical literature on the structure of networks has predominantly focused on single layer networks where there is a single set of edges between nodes. However, there is an increasing realization that many real-world networks have either multi-layer or interdependent structure. While the former considers multiple layers of relationships between the same set of nodes, the latter deals with networks-of-networks consisting of interdependencies between different subnetworks. This thesis focuses on the analysis of the structure of multi-layer and interdependent networks via strategic and stochastic approaches. In the strategic multi-layer network formation setting, each layer represents a different type of relationship between the nodes and is designed to maximize some utility that depends on its own topology and those of the other layers. By viewing the designer of each layer as a player in a multi-layer network formation game, we show that hub-and-spoke networks that are commonly observed in transportation systems arise as a Nash equilibrium. Extending this analysis to interdependent networks where there are different sets of nodes, we introduce a network design game where the objective of the players is to design the interconnections between the nodes of two different networks, G1 and G2. In this game, each player is associated with a node in G1 and has functional dependencies on certain nodes in G2. Besides showing that finding a best response of a player is NP-hard and characterizing some useful properties of the best response actions of the players, we prove existence of pure Nash equilibria in this game under certain conditions. In order to obtain further insights into the structure of interdependent networks with an arbitrary number of subnetworks, we consider a model for random interdependent networks where each edge between two different subnetworks is formed with probability p. We investigate certain spectral and structural properties of such networks, with corresponding implications for certain variants of consensus dynamics on those networks. In particular, we study a property known as r-robustness, which is a strong indicator of the ability of a network, including interdependent networks, to tolerate structural perturbations and dynamical attacks.