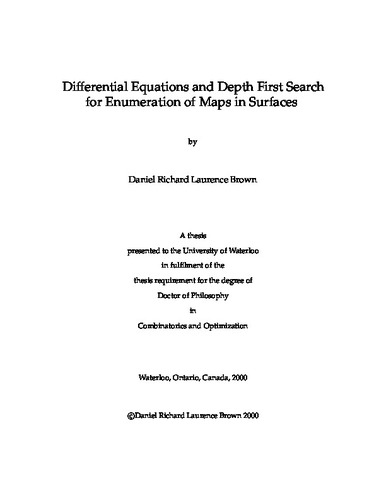 A map is an embedding of the vertices and edges of a graph into a compact 2-manifold such that the remainder of the surface has components homeomorphic to open disks. With the goal of proving the Four Colour Theorem, Tutte began the field of map enumeration in the 1960's. His methods included developing the edge deletion decomposition, developing and solving a recurrence and functional equation based on this decomposition, and developing the medial bijection between two equinumerous infinite families of maps. Beginning in the 1980's Jackson, Goulden and Visentin applied algebraic methods in enumeration of non-planar and non-orientable maps, to obtain results of interest for mathematical physics and algebraic geometry, and the Quadrangulation Conjecture and the Map-Jack Conjecture. A special case of the former is solved by Tutte's medial bijection. The latter uses Jack symmetric functions which are a topic of active research. In the 1960's Walsh and Lehman introduced a method of encoding orientable maps. We develop a similar method, based on depth first search and extended to non-orientable maps. With this, we develop a bijection that extends Tutte's medial bijection and partially solves the Quadrangulation Conjecture. Walsh extended Tutte's recurrence for planar maps to a recurrence for all orientable maps. We further extend the recurrence to include non-orientable maps, and express it as a partial differential equation satisfied by the generating series. By appropriately interpolating the differential equation and applying the depth first search method, we construct a parameter that empirically fulfils the conditions of the Map-Jack Conjecture, and we prove some of its predicted properties. Arques and Beraud recently obtained a continued fraction form of a specialisation of the generating series for maps. We apply the depth search method with an ordinary differential equation, to construct a bijection whose existence is implied by the continued fraction.